Well it was an interesting afternoon on the beach for Patrick Sachetta and family. Patrick is from Lynn, MA . He landed this beautiful 22 pounder about the middle of the outgoing tide in the Merrimac River. His bait of choice and the fish’s was Surfland Worms!  Patrick also caught and saw others catch a few smaller fish on lures and worms.  He was lucky to land this fish because he wasn’t paying much attention to the rod in the sandspike while holding his daughter and the next thing he knew he had to pass her off and go running for his rig. Nice save and nice catch! 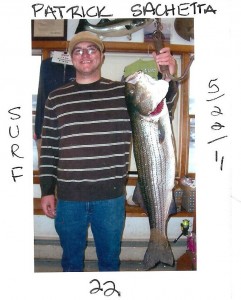 But what made their day even more interesting than they even wanted it to be is that they had to help dig a girl out of the sand. Story goes that some teens dug a hole near the waters edge along the banking  down to the right of the Captain’s Party Boats that was way over their head and were busy going in and out of it. Well due to many factors over that last six months the mouth of the river and the surrounding beaches are very unstable. The sand is soft and constantly shifting. The boats going through create some large wakes that send swells to the shore. Well one swell hit the edge and caused the hole to cave in up the girls legs. They had to dig her out fast before the sides caved in even more. All ended well, but again as earlier posted, this is a very dangerous area this year. Please be careful. Respect the ocean and especially the mouth of the Mighty Merrimac River. Some lessons were learned today without anybody coming to harm. So everyone be safe and if you are going out into the river be very careful.

From all of us at Surfland,