Wow, what wild wicked weather we are having this weekend. The sun is finally out, but it comes with a cool wind. The fishing has been incredible to say the least. There are fish everywhere. Low tide has been good down the river, the last two hours of the outgoing. One day they were there well after the low, but the next it shut off right at the bottom of the tide. The fishing on the oceanfront has been almost non stop the last few days. The fisherman who braved the wind and rain were rewarded with some fish.  Yesterday, the fish just seemed to run back and forth all day along the oceanfront.  Working well for lures on the oceanfront were lead head jigs, Charlie Graves, other types of metal, and Daiwa SP Minnows!  The bait of choice was WORMS!

One of our employees, Brendan,  headed out at 9PM last night with Tommy Kelly and Bryan G. from VT. They walked the oceanfront using needlefish and fished the top of the incoming tide. Bryan hooked into a few fish with the biggest in the low thirties. Brendan got one 30 incher and a few hits also. Tommy got a few hits but didn’t manage to land any.  They reported lots of taps, the secret was to reel slow, slow, slow.

The Kellys are down for the holiday weekend and we managed to get a little report from Andy:

May 26/2013-  Andy Kelly here. As some of you know the Plum Island Surfcasters Invitational Tournament was today. It began at midnight and ended this morning. My father and I went out on the oceanfront at 5 a.m. for the bottom of the tide which provided many smaller fish with a couple keeper sized stripers. At dead low fishing slowed down but picked right up as the tide began to come in providing us with some more smaller fish but also a 36inch fish that took both baits on  mine and my father’s line! I also saw a few more 30+ inch fish caught down the beach. Billy Page caught a 34inch striper weighing in at 14lbs 2 0z. This fish really put up a fight taking Billy many yards down the beach. Overall the fishing was decent and there are fish to be had if you put your time in. Conditions may be less than ideal for fishermen but the fish are there. 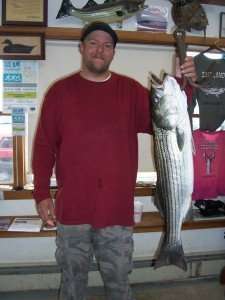 We are getting some boat reports in.  Joppa Flats is becoming productive.  A few local tube n’ worm guys were trying this weekend.  We were able to get some fresh mackerel in for the weekend.  One boat reported that they did well with fresh tinkers yesterday and came back for more today before heading out.  There are fish in the Plum Island Sound.  Work lures around the maintenance shacks at high tide.