Lousy weather the past two days. Not doing much to warm up the water and entice the stripers up the Merrimack. On the plus side there were two fishing-related articles in the local paper, the Newburyport Daily News. One’s about our own Mike Hosker and the coming of the fish.

The other story is about the return of stripers to the same place as they visited last year. Martha Mather from the University of Massachusetts has run an acoustical bass tagging program in Plum Island Sound for a few years. The researchers catch a fish, operate on it and insert a peanut-sized (an unshelled peanut, looks pretty big) radio in the fish’s body cavity. That radio emits a tone that is picked up by receivers all around the Parker River basin and records where they swim. Some hung out at the same place, some skittered all around the bay. They were trying to find out what made fish stay in a particular place: tide, food, current, whatever.

So, in lieu of any kind of good fishing report. Here’s another great vintage pic from the Archives at Surfland. Jon Kodwyck from 1963. A big, big 57 pounder in front of the shop. 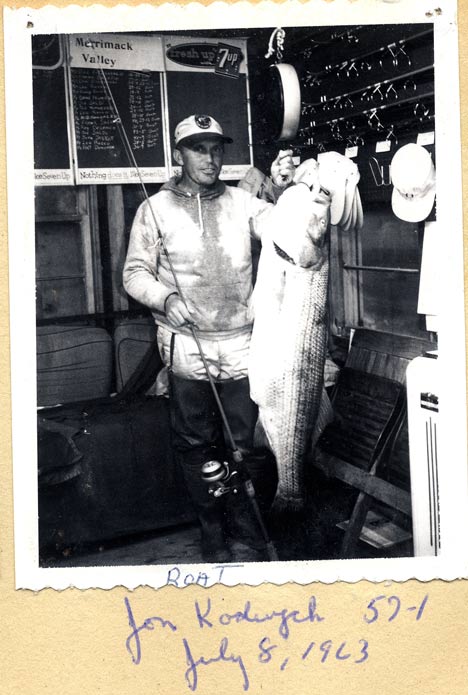