Nighttime Catch and Release (well, except for the eels.) 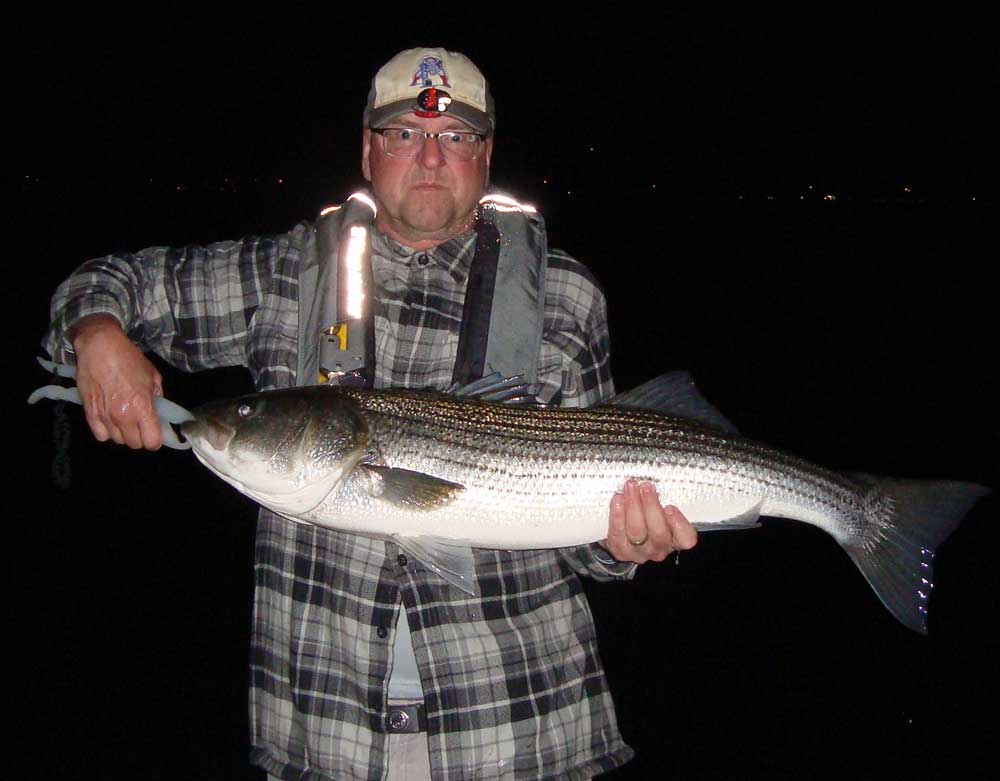 06 Jul Nighttime Catch and Release (well, except for the eels.)

Ten years ago, I went fishing with Joe Brotz. He’s an striper slinger of some renown around here. He fishes primarily with live eels at night. When he took me out, I’d only been fishing at night about 5 times. Though always told that’s when the big fish are caught, I guess I was too afraid to test my boating skills under moonlight. I made a short film during that night, and it pretty much changed my fishing habits from then on.

Now, like Joe, I’m mostly a nocturnal guy. My dock is on the Plum Island Basin, so I only have water three hours before, to three hours after high tide. That means roughly twice a month I get the right timing for some decent night fishing. This past week has been one of those stretches, so I’ve been hitting the water hard for the last 6 nights, and it’s been pretty good, especially compared to the last few years.

My rig is simple. A swivel, 2 feet of 30 pound leader, and a 6/0 or 7/0 hook. While this might not hold up to a 50lb fish, it’s worked pretty well for me on stripers up to 48″ over the years. I pierce the eel right through the bottom of the jaw, and exit through the center of the skull. Gotta say that this seems fairly barbaric, but so it goes. The eel, as you might imagine, is not too pleased with my arrangement, and they are wiggly sons of bitches. But if I get them in the water quick enough, I generally avoid the dreaded eel ball when the critter wraps itself and the leader into a moving, slimy knot.

Joe is way, way more skilled than I am. He sets one or two rods up as trollers, and casts one a bit in the front of the boat, slowly retrieving with just enough speed to keep contact with the eel. Because I’ve snarled my casting and trolling lines far too many times, I now stick to the single rod, casting as I drift, or slowly troll with electric motor. Besides, I like to feel the sharp snap of the hit.

So anyway, over the last 6 nights of fishing I’ve found lots and lots of schoolies like to eat my eels. Most of the fish were between 22″ and 28″. I landed between 5 and 10 each evening on the incoming tide in the Merrimack River. After the full tide it seemed to shut off the feeding frenzy of the little guys. The water temperature until last night was a chilly 54 degrees, however the hot days finally caught up to the river, and the temp increased to 62 degrees. I found the action died down a lot last night, so maybe it was related to calm wind and higher temp. I really don’t know.

There were a few decent fish now and then. I’d figure 5 or 6 keepers this week. My top fish was 40″, and a couple of mid-30″ fish too. Who knew I had such a dopey face in fish photos. 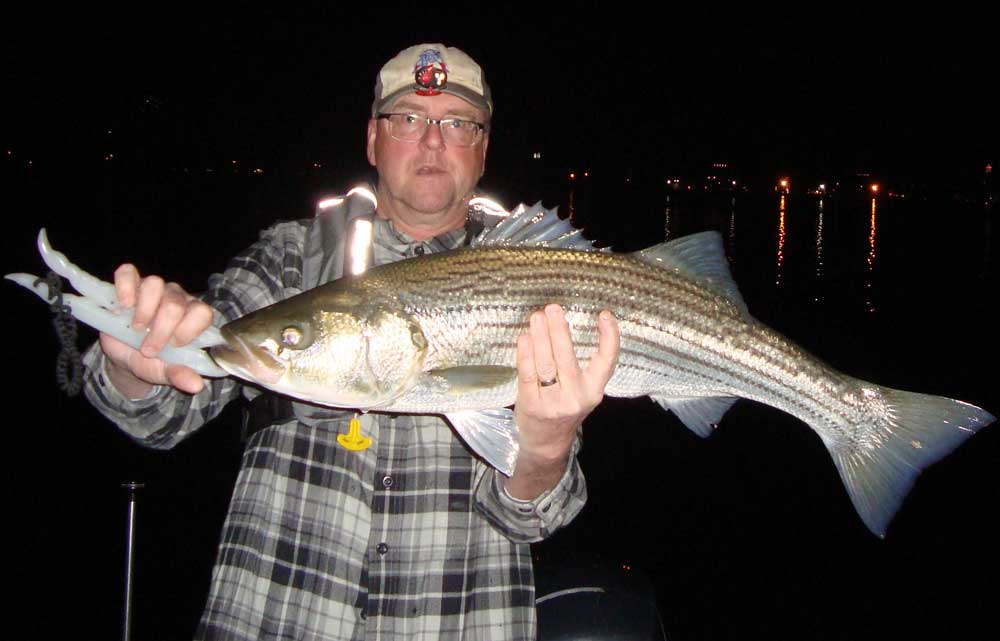 Joe Brotz used to be a commercial bass fisherman, but for a long time now he’s a catch and release guy. I’ve followed his footsteps there too. Everything I caught this week went back into the river in the best shape I could manage. Though I’m happy to eat a striper or two each season, my favorite part of each catch, especially with the larger fish, is reviving them by holding the tail and gently pushing them back and forth. When they finally come back to life I love feeling them push off, and even enjoy the splash in the face.