Friday afternoon brought us some fresh mackerel caught by our local film maker who we shall call “Stinky Stickman” on that day.  James went for a ride in his boat and caught about 100 mackerel in the High Sandy area (PRWR) in 20 feet of water.

The Kelly boys fished the parking lot #6 area Saturday morning and caught a bunch of schoolies, with the largest in the 14 pound range using clams and worms.  We heard of several more fish caught during the day on Saturday up to 32”.  We are also getting reports of sturgeon jumping out of the water all along the northern half of Plum Island oceanfront.  Billy Page told me that he saw about a dozen jumping on Saturday. 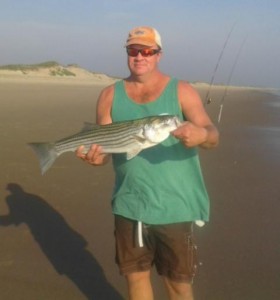 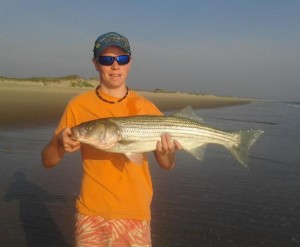 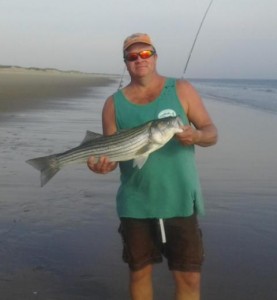 Saturday’s overnight report was not impressive at all.  Talked with some of our buggy guys who reported that fish were few and far between, with the exception of the guys fishing the Camp Sea Haven area (AKA Polio Camp).  The fishermen in that area did well.

Upriver in the Merrimack, Kay received reports of lots of small stripers chasing little baitfish from Rte. 1 to Chain Bridge.  Fishermen are using lead head jigs, small swim shad, and sand eels imitations.  Biggest fish was around 35” caught by Charlie Novotny.    Down at the mouth, we have had a few guys fishing at the sandbar area at low tide and the jetty using lead head with RonZ tails.  We also heard of one small fat bluefish caught off the jetty this morning.  Ocean side of the south jetty has produced some fish this morning at daybreak, still all schoolies.

We are also getting reports of some fish being taken in the Parker River/Plum Island Sound at night with eels.  And the mouth of the Parker River (Sandy Point) is also still producing a few fish at different times with low tide being the better of the tides.