October 20, Scads of bait, nothing chasing

Today is just a beautiful day, and the tide was right to take a morning trip and see if there was any life outside the Merrimack mouth or along the beach. At the jetties I was greeted by the welcome sign of 50 gannetts diving followed by their huge, rocket-style splashes. I moved up slowly and watched the fishfinder. I figured Gannetts=mackerel. The fishfinder lit up with a pretty steady stream of marks in the 12-25 foot depth. I jigged for a while, but no luck.

Now “fishfinders” and I have had a poor relationship in the past. I usually found little correlation between the “found” fish and real ones. This year, though, I bought a new (used) ride and it came with a nifty new Garmin 440s chartplotter. I usually fish the flats, so the real utility has always been depth to me, trying hard to avoid the sunken jetties. But this year I got outside a lot more and started using the sounder, fully expecting nothing from it.

A month or so ago there was just a ton of bait along the beachfront about 250 yards off shore. I could actually tell from the huge red blobs that came up on my sounder. Sure enough, when I dropped a butterfly jig these little mackerel would follow it up. So now, in addition to looking for birds I have the added fun of watching the video game under my boat.

Having no luck hooking up, I boated to the ever-productive High Sandy area off the Reservation beach. I threw out a mackerel swimmer that rides right at 30 feet and began to troll. I couldn’t tell if the little blips on my sounder was bait or just some clutter in the water. I trolled in 52 feet of water, and this clutter sat between 15 and 25 feet. Once in a while there were a couple of bigger blips under the clutter, but nothing took my swimmer.

Kinda frustrated, I wanted proof that my fishfinder had actually found fish. I untangled my 5 hook fish skin sabiki rig and dropped it down into what I assumed was a pile of sandeels or something. Yup, soon as I got to 15 feet, without even jigging once, I felt some little tugs and reeled up. Three tinker macs. Next drop five little ones. Only hooked my finger once unleashing the macks. Another drop, another five.

When I turned on my baitwell the hose coughed up about 75 little krill that at one time must have been sucked up. When I dropped the macs into the well they started hunting and one-by-one ate nearly every one of the krill. The macs didn’t even seem to mind being in a boat-bourne aquarium.

I don’t have a big freezer to save these guys, so they all went back to their business in the sea. But if you want some great bait for next spring, I suggest you bring a bucket and head to the 50 foot mark off High Sandy and stock up. 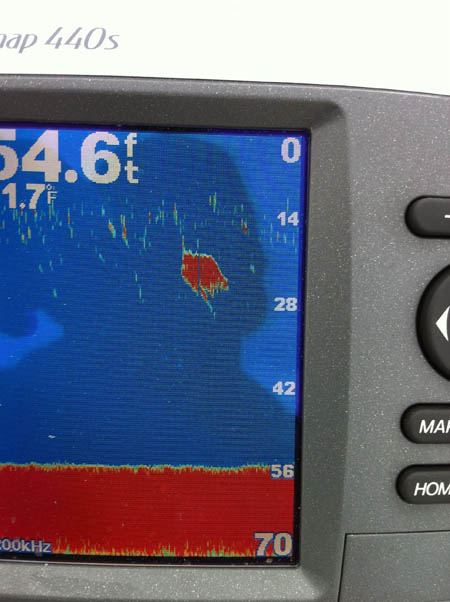 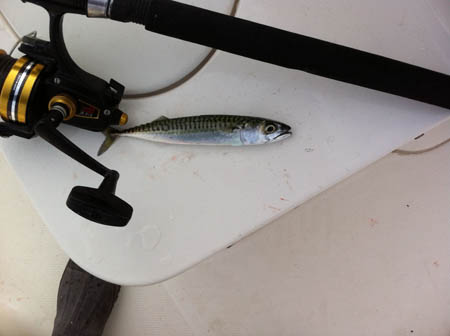