October 5 They’re around so keep coming

.
By the way John, and I hope you don’t take offense, but does anyone ever mistake you for actor Donald Gibb, who brought life to the character “Ogre” in Revenge of the Nerds?
.
From Chris Pinzone we get this note:
Fished last Saturday from 7 am to 2:30 pm in my boat.  Picked up a half dozen live macks out at Breaking Rocks & it was tough making bait.  Headed down to Plum Island and drifted down along the reservation on the incoming.  Nearly all of my live bait came back with just the head and I couldn’t connect on a number of hits from bluefish.  Worked pretty far down the reservation, trolling a live mack and an X-rap mack, then stop and drift when I marked fish, trolled some more, drift, etc. Only picked up two bluefish in the 10-12 lb range, both trolling the X-rap.  Drifted into a few pods of stripers, could only tell because I spooked them, tried casting big eyed flies into them with no love, tried little sandeel flies too, but nada.  Should have taken a picture of the one bluefish I caught – it didn’t really have a tail, looked like it was bitten off when it was young.  I considered trying to give it an artificial tail, then  rehabilitate it, and make a movie about the special bond that develops between me & the fish, but the damn thing just kept trying to bite me so I tossed it back!  Beautiful day on the water! 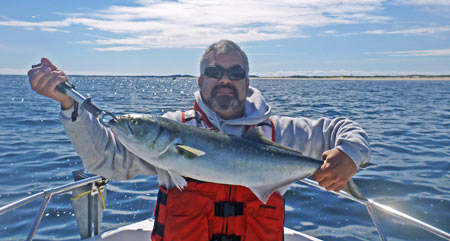