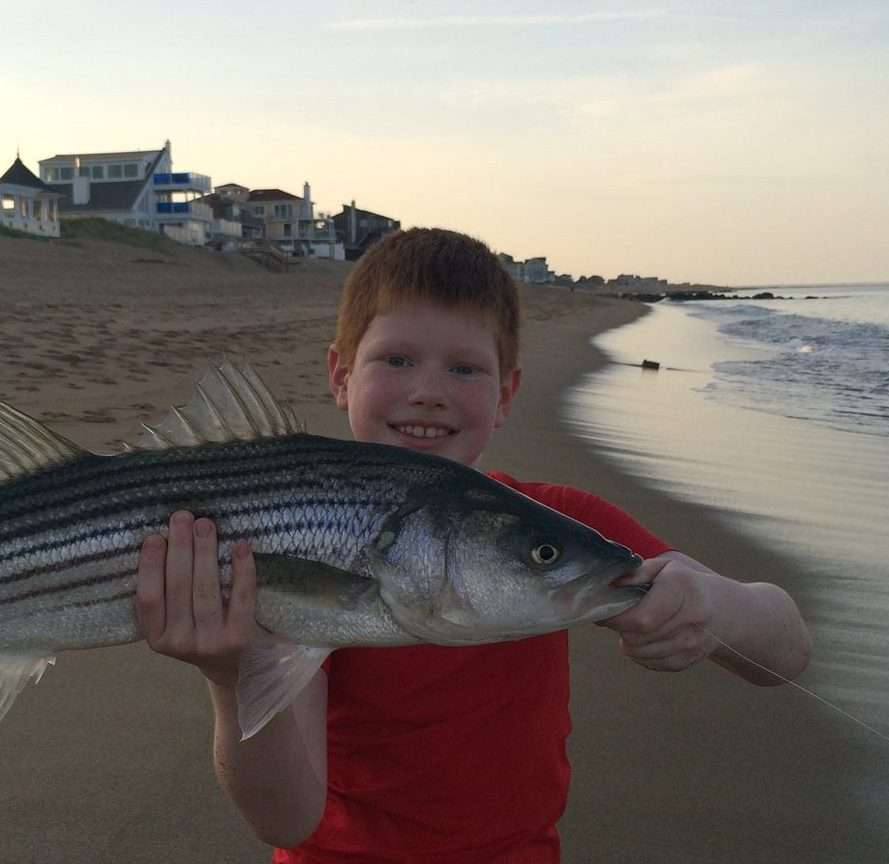 What a week of fishing! It has been crazy insane down here on the oceanfront. The Aham Family, Craig (from Surfland), Steph, Ben & Luke have been fishing most days after school. Luke reports that the bite has been strong. Here is 9 year old Luke fighting a fish that he caught using a soft plastic shad body with a jig head. This fish was 28″ and was released back to fight another day. Craig told us that altogether they have caught over 200 fish this week, most of them averaging around 14″ with the occasional bigger fish being caught like Luke’s! What a way to spend time with the family. And yes, that is Ned in the background! 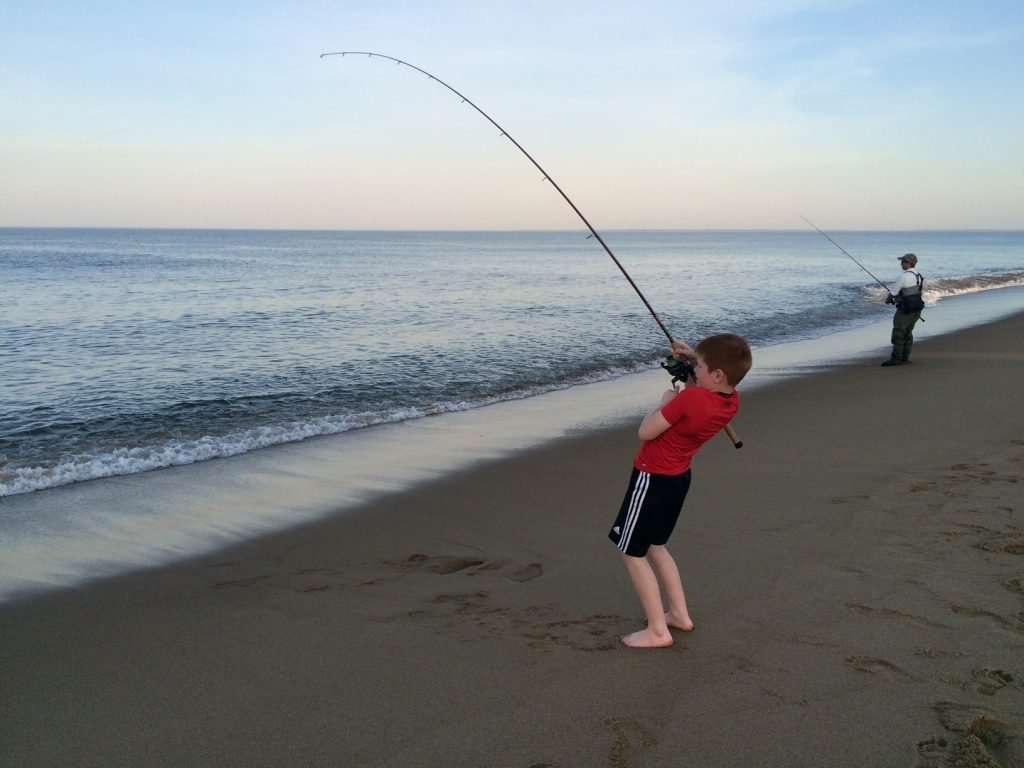 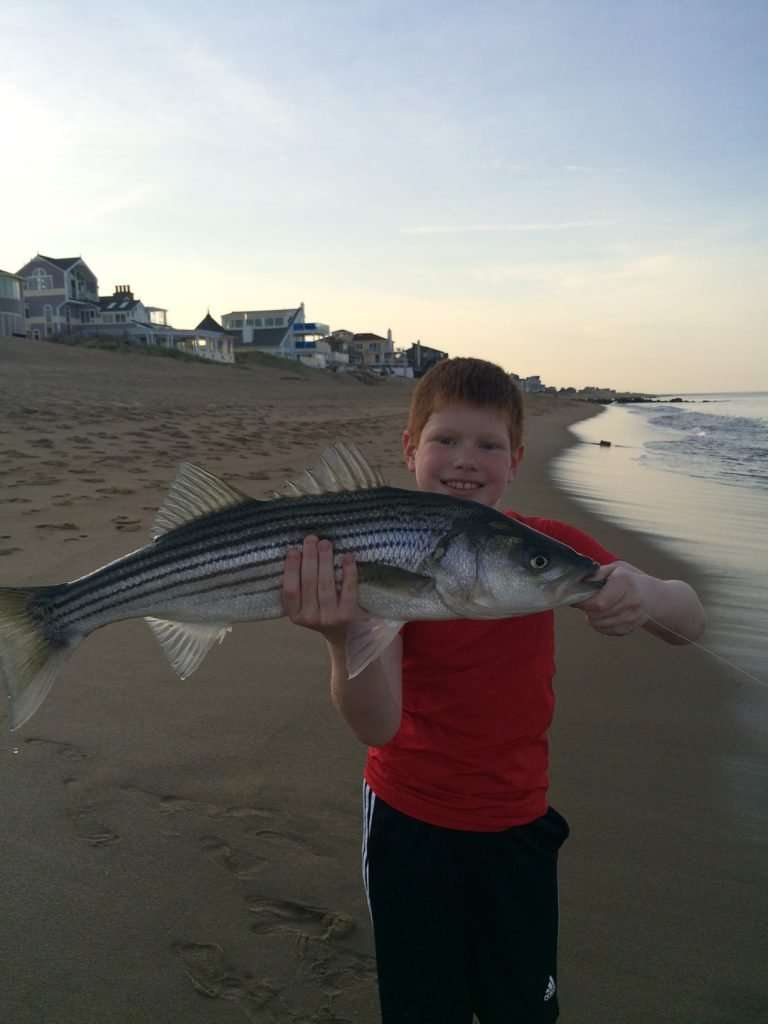 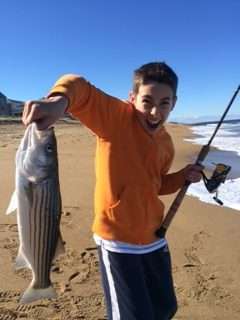 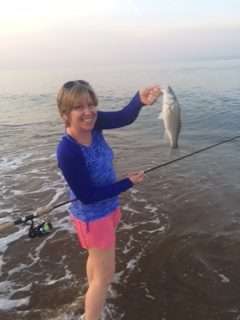 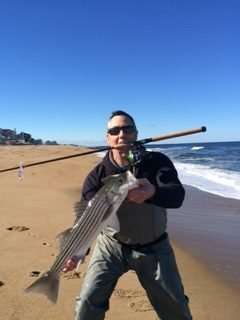 And here’s another great story.  On Wednesday morning, Al “Lefty” Gonzalez from Melrose fished at Parking Lot #1 in the Parker River Wildlife Refuge early in the morning.  He caught 39 schoolies on a bucktail jig.  Left the refuge and headed to Rocks Village bridge to fish for shad.  He caught six.  Then on his way back to PI to fish the outgoing, he stopped at the Artichoke Reservoir  and caught a 22 inch pickerel.  Then came and fished the outgoing at the mouth and caught a half dozen more schoolies.  He had a great day!!

Merrimack Valley residents Joe and Jacob Powers came down to fish in the morning yesterday about 8AM.  They fished the ocean side of the south jetty.  Caught tons of schoolies, all under keeper size.  Joe came in afterwards to pick up another blue mackerel SP Minnow….Joe gave Martha his report and she passed it on to more Merrimack Valley residents.

Narith Proeung and Justin Mui fished from noon yesterday til about 8 pm.  They were walking along the oceanfront from Surfland towards the jetty and as they said, ” we caught hundreds of schoolies on every lure 5 inches and under.  We used topwater, bucktails, little needlefish, swimming lures….we used it all!”  They were very excited and very dehydrated!  They sucked down some Gatorade and were going to head back down to the beach to fish into the evening.

Spring fishing is happening now, where are you?