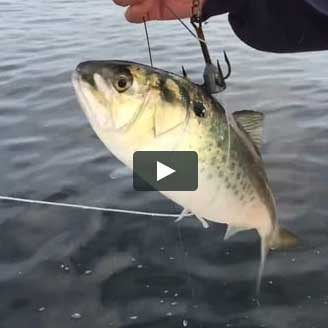 This morning the Pogie show opened again. The fish were flipping about in quite a large school off the beachfront. These were pretty big, and easy to snag. While Jim, Dave and myself were there between 5 and 8 am, folks were live-lining them in the Merrimack Mouth on the outgoing tide. I didn’t have any luck, and did not see anyone else hooking up. Then again, I don’t really know what I’m doing when it comes to Pogies.

This fellow, however, DOES know how to use a pogie. Pete Shactman grabbed this one this week live-lining a Menhaden. (fish released)

Not an especially pretty fish, and from what I understand, not very pleasant on the palate, they are, however, quite tasty to stripers, bluefish and the local tuna population. We haven’t seen large schools of these around Plum Island for a number of years. These local schools look to be fully mature ones. I’ve usually only seen them as juveniles (peanut bunker) being pushed onto the beach by the local predators. Hard to believe they get from 1″ long to the size we saw today.

The Most Important Fish In The Sea

You might want to check out this short video by the author of a GREAT book about the East Coast importance of the Pogie. Buy the book by H. Bruce Franklin, and named, of course, The Most Important Fish in the Sea (click here). It’s a wonderful read. I’ve finished it three times.

Wikipedia has a pretty full account describing the Plight of the Pogie:

Menhaden, also known as mossbunker and bunker, are forage fish of the genera Brevoortia and Ethmidium, two genera of marine fish in the family Clupeidae. Menhaden is a blend of poghaden (pogy for short) and an Algonquian word akin to Narragansett munnawhatteaûg, derived from munnohquohteau ‘he fertilizes’, referring to their use of the fish as fertilizer.[1] It is generally thought that Pilgrims were advised by Tisquantum (also known as Squanto) to plant menhaden with their crops.[1]

Menhaden are flat, have soft flesh, and a deeply forked tail. They rarely exceed 15 inches (38 cm) in length, and have a varied weight range. Gulf menhadenand Atlantic menhaden are small oily-fleshed fish, bright silver, and characterized by a series of smaller spots behind the main, Humeral spot. They tend to have larger scales than Yellowfin menhaden and Finescale menhaden. In addition, Yellowfin menhaden tail rays are a bright yellow in contrast to those of the Atlantic menhaden.

Menhaden travel in large, slow-moving, and tightly-packed schools with open mouths. Filter feeders typically take into their open mouths “materials in the same proportions as they occur in ambient waters”.[3]Menhaden have two main sources of food: phytoplankton and zooplankton. A menhaden’s diet varies considerably over the course of its lifetime, and is directly related to its size. The smallest menhaden, typically those under one year old, eat primarily phytoplankton. After that age, adult menhaden gradually shift to a diet comprised almost exclusively of zooplankton.[4]

Menhaden are omnivorous filter feeders, feeding by straining plankton and algae from water. Along with oysters, which filter water on the sea bed, menhaden play a key role in the food chain in estuaries and bays.[5] Atlantic menhaden are an important link between plankton and upper level predators. Because of their filter feeding abilities, “menhaden consume and redistribute a significant amount of energy within and between Chesapeake Bay and other estuaries, and the coastal ocean.”[6] Because they play this role, and their abundance, menhaden are an invaluable prey species for many predatory fish, such as striped bass, bluefish, mackerel, flounder, tuna, drums, and sharks. They are also a very important food source for many birds, including egrets, ospreys, seagulls, northern gannets, pelicans, and herons.

In 2012 the Atlantic States Marine Fisheries Commission declared that the Atlantic menhaden was depleted due to overfishing. The decision was driven by issues with water quality in the Chesapeake Bay and failing efforts to re-introduce predator species, due to lack of menhaden on which they could feed.[1]