The past week has unfortunately been fairly slow. We have gotten a bit of news here and there, but for the most part pretty slow. This weekend the buggy guys reported some big surf due to an offshore storm. They got small fish this weekend that were mostly in the 12-24 inch range. I know you all would like to see some bigger bass, but it is nice to see so many small ones. I can tell you that they hit fish saturday afternoon down the southern end of the island from about 1pm-3pm. Local fisherman Chris came in and reported that he got into a good blitz from about 1-3pm (incoming tide) down the southern end of the island. We also had Steve Andrews from Nashua, Nh come in with a 9-12 that he caught at Sandy Point on the State Reservation on worms also during the incoming tide. He also said he had gotten about 6 other fish in the 24″ and under range. Billy Page was in today and he got into a few fish at lot 3 this morning. He got about 8 schoolies and then belly hooked a 10 lb bluefish that was his best fight of the day. (Not to send you guys elsewhere, but we heard that Gloucester has been pretty hot!…………and don’t worry, we also heard that Maine has still got big fish!)
~~~~~~~~~~~~~~~
STEVE ANDREWS 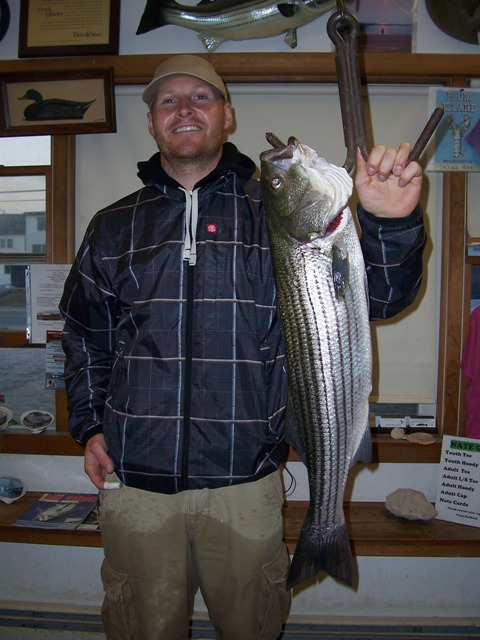