Armageddon! Fire and Brimstone! Dogs and cats living together! The Earl hype is just beginning here on Plum Island. What the hell will happen depends on who you listen to. From the moderates we hear it will rain Friday night and be a little breezy. The progressives are predicting a 14 foot storm surge and 30 foot waves. Somewhere in the middle lies the truth. Personnaly, we hope for a mild attack from Earl.

Despite the frenzy and the kind of steep waves along the beachfront, bluefish have arrived. Sunday we got a report of a few dozen dragged in by a boat carrying a few kids. They spent the early afternoon with lots of fish taken while trolling swimming plugs. Yesterday a local claims to have taken 38 blues from early morning through 1pm in about 20 feet of water (though he wasn’t really sure of the depth.) So it seems there are bluefish to be had off shore a little way. We suppose umbrella rigs would also bring them in.

There are conflicting reports on bass. Some folks are hitting them regularly, some swear they’re not around. Your author has been skunked his last two times out, so I’m on the “dissapeared” side. At any rate we did get this report and photo from Nikko, “Went out Sunday about a mile fron Salisbury beach. It was about 1 in the afternoon and a 35 inch striper took a live eel. We also saw a ocean sunfish or mola mola come right up to the boat and swim away.” Pictures tell the story. 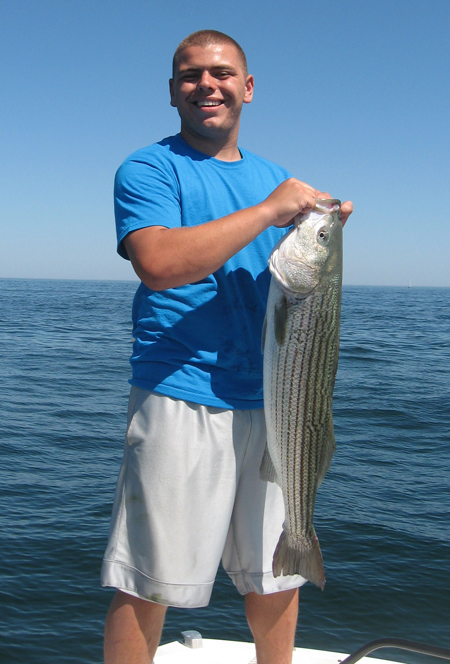 Giant tuna have been active about 5-6 miles outside the merrimack, pretty much due east. Sunday there were at least 50 boats out livelining with balloons. I don’t know where they are finding the Macs, so if you know let us know.

Don’t forget about our sales theis weekend and all month. Scroll down to see the specifics.