September 20, A tale of Two Oceans

So, some of our regular customers are bemoaning the dearth of fish here on the island. Stickman and U-boat were all but skunked on Saturday. Tall Jeff says the beach was “worse than a desert w/o tumbleweeds.” A.Link reported 2 blues trolling in 7 hours. However, as the following reports and pictures will attest, some folks are having a great Fall Run.

While most of you were sleeping this morning figuring Igor has put a damper on your fishing, Peter Timmins and John Noonan hit the beach over in Ipswich. They spent the night, midnight until day break “slinging” eels. Peter brought this nice 32 pounder in this morning. I think John had to go to work. Peter had a good night with about 6 fish being landed and this was the biggest of the night and a season high for him.   Peter hit fish until the wind turned at about 3am and left me with this saying: “Wind from the east, fish bite least”.

Peter will be taking this fish home to turn it into his “Striper Chowder”. I am trying to get him to give me the recipe so I can put it on the site. We’ll see 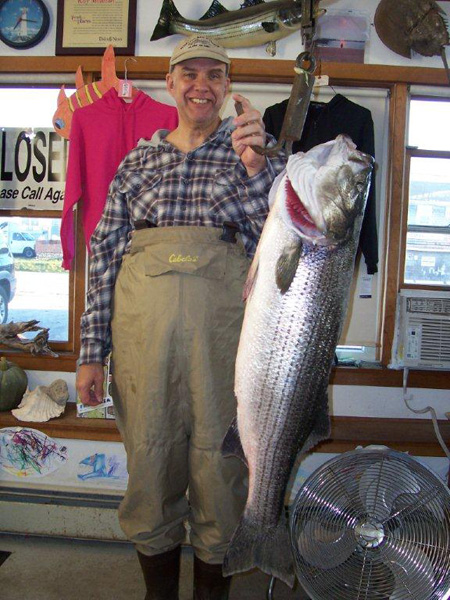 Doug Henderson from North Andover was waiting for me when I opened the store this morning, bought some worms (blood and sea) and headed down to the refuge to see what he could do. The surf that has kicked up from Igor didn’t get in his way. Doug just left the store at noon with this 24.4 pounder(personal best)! He reported that he was using his Surfland Worm Cocktail (put on a seaworm and then wraps a bloodworm around it to help hold it on). Doug ran into a bunch of schoolies before landing his “keeper”. All during the incoming tide he hooked into 14″-27″ fish before catching this one. Doug also stated that he ran into very little weed and only have a few tangles to deal with during this fishing trip. 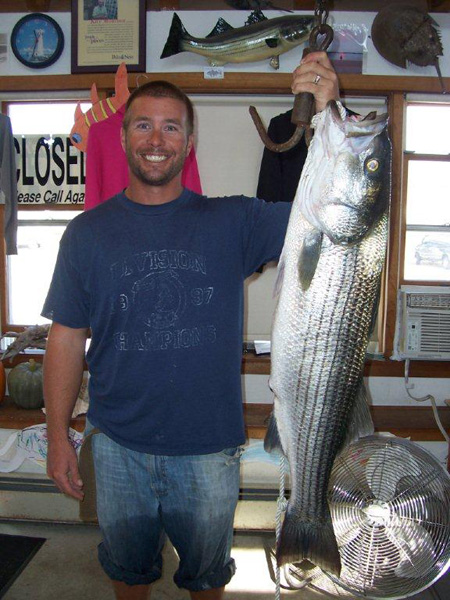 The tuna trailers have also been shut off. Tom S took a long trip and found birds, but no tuna. A big basking shark seemed to be creating the avian commotion. He did get a peek at a few giants on the topwater, but nothing else and no hookup.