Over the weekend the bluefish made up most of the stories. There were small blues and small schoolies along the North Jetty Sunday at daybreak, then another wave of bigger ones around 8 or so. You can see Steve Kerns with a couple of the fish below.

There is plenty of bait around the mouth of the river. It’s just stacked with schools of sand eels. I saw dozens of boats trying everything they could to find the fish under the bait. There were even hundreds of small gulls diving to eat the eels, but only a few were dragging up a fish. The most productive guy, who we call Speedy Troller was having more luck than anyone trolling umbrella rigs. We had a report at finally at around 4pm yesterday the blues arrived for a few hours. But again today the birds and bait were hanging around.

On the beach the blues were running the beach in little clusters yesterday, no steady action but we got a number of reports about them. 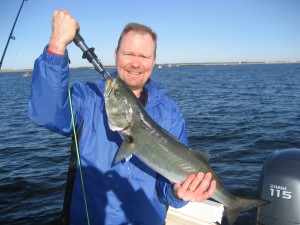 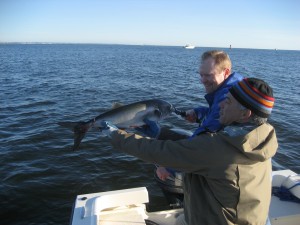 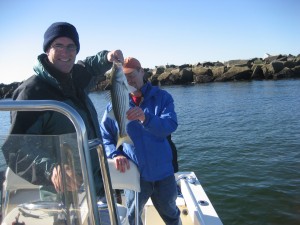