September 4 – where is everyone?

Wouldn’t you know it, the weekend is over, the weather a bit crappy, and the fish are biting. Come on guys, it is always good after a weekend. The rainy drizzle….perfect! Had 3 reports from just about the 3 fishermen we have seen, a few more came later in the morning to try their luck. The low tide to the incoming was the ticket today. My first report came from a fisherman that was at Sandy Point early this morning. He got a 25″ fish and saw others jumping after some baitfish. Then later on I had Paul Szostak come from parking lot 1. Said he was the only one around, had the beach to himself. He caught about 12 fish from 18-25″ from dead low and the start of the incoming tide all on worms. And just before he was about to pack it in…………he caught & released this 37″ (pictured below), again on worms. Then, just about an hour ago we had another fisherman in the was at Sandy Point and had fished the incoming tide. He weighed in a 12-8 that he got on worms. The fish are here, get out there! 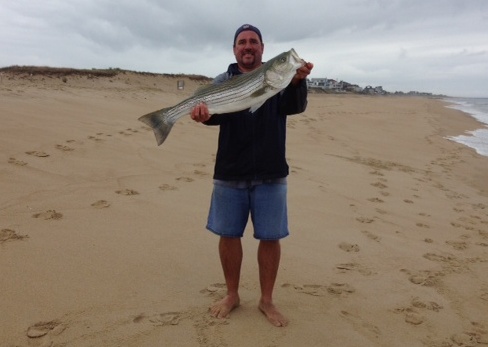