September 5 – Lobsters are the new Skate

Posted at 10:36h in Catch and Release by Stickman 1 Comment
0 Likes 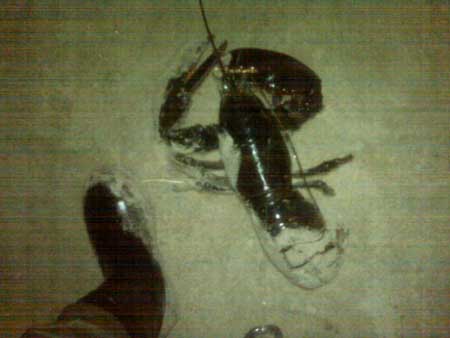 Decided to fish lot #3 at the res tonight, and along with my usual worms and clams grabbed two monster-sized eels. Sent them out with just a hook, Giant eel #1 got hammered fairly quickly, I grabbed the rod and went to set the hook, and -poof- fish off. Decided my hook was too small for such a beastly eel, and after wrestling it off- they were full of piss and vinegar – sent him back out, and lost him.
.
Put on giant eel #2 and after about 3 minutes in the water, the rod starts twitching, I start reeling thinking it’s tangled up in some weed, then the weed starts pulling back. I had no idea what to expect, it almost felt like a giant skate…. and out comes a 10+pound lobster.(yes, I weighed it) Hooked just below the claw, with line wrapped around the body and leg.Seeing it was a female, I tried to be as gentle as possible.
.
I had to put it in my huge 6 gallon bait bucket just to try to contain it while I unhooked it, as it was none too happy. While I’m doing all this, my other rod gets a hit- something small, i’m thinking another skate…… but nope: another lobster- 3lbs, and another female. Hooked the same way.
.
Sent them both on their way unharmed and angry at me! I haven’t even used my 10pot license this year, maybe it’s a sign. Or maybe the fish gods were just further taunting me after I lost the only good hit of the night. I’ve never caught a lobster on a surf rod, let alone 2 back to back.
.
Fished 7pm – 11pm, didn’t see anyone else out there. Plenty of skates on both worms and clams, no bass. Wish I had brought a few more eels! Not the best pic, taken with my cell phone, my size 11 wader boot is on the left for scale.