Okay, so it was raining a bit this morning, so what. Had a few brave souls out there but didn’t hear of much until later during the incoming tide. Dustin LeBlanc (Durham, NH) and Seth Wilson of “the Little Bay Boys Club” came in during the am. They got rained out at work so what better to do than fish. Bought some worms and headed down the refuge. Said he would be back with a fish….and sure enough a few hours later in they came. Dustin weighed in this 11-4 (32″) that he caught at lot 1 (pictured below). Between the two they said they got 15 fish between 12″-32″ with most being in the low 20’s.

We also just got a phone call from Rick Prefontaine giving us a report. He came down last night, bought some eels (YES WE HAVE EELS), headed out this morning (early) to throw some eels in the Hampton River and got himself a 42″ fish. Then he had another fish, bigger than the first, fought it for a while and ended up with a straightened hook. Don’t worry Rick, he’ll be there tomorrow!
~~~~~~~~~~~~~~~~~~~~~~~~~~~~~~~~~~~~~
DUSTIN LEBLANC 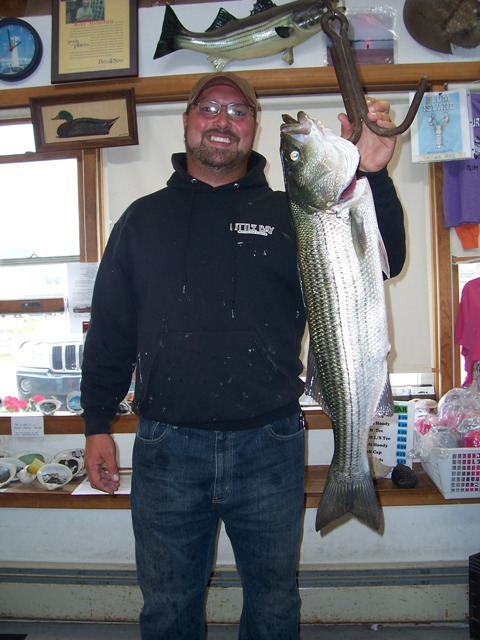