The Fishing Environments of Plum Island

Posted at 18:01h in Uncategorized by Steve 7 Comments
0 Likes

Plum Island is a large and diverse area to fish. When I try to break down the various environments that one can fish, I tend to break it down into three main areas: The Marsh, River and the Beachfront. Each of these environments has their own character and ways to be fished. For instance, you’re probably not going to fish the Parker River where it crosses the marsh the same way you would fish the oceanfront. These locations often call for different lure selections and presentations. I’d like to share a bit about my experiences in these locations so hopefully it will help you out this coming season. 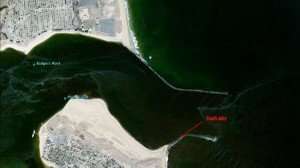 1 – The River
As many know, the first stripers of the season typically show up in and around the mouth of the Merrimack River around late April to early May. There is a great stretch of river that is fishable on the Plum Island side starting at the “Captain’s Ladies” fishing boats heading all the way to the start of the jetty. The depth drops pretty quickly on the corner of this stretch, so be cautious when wading. Since there is extremely fast moving water here you will require some weight to get your offering deeper down to fish. I tend to reach for a bucktail or a slugo-style lure being on the smaller side (around 5-6 inches, tipped with a jig-head anywhere from ¾ to 1 ½ ounce works). Generally a dropping tide is the rule of thumb here, but fish can be taken on the incoming tide as well. One drawback to this stretch is that it tends to become pretty crowded once the weather gets nice and the fishing picks up. Many people choose to fish baits here (sandworms, clams, chunks) and it can get pretty hectic with people fishing 20 feet from each other in a strong current.

There is another small spot that’s sometimes productive to the left of the party boats. This is fishable via a mussel bed located about 40-50 yds from this beach area at mid-tide (wading required!). Look further to your left and you will see where the “basin” dumps out into the river. I’ve seen one of the biggest blitzes of my life on an early June afternoon in that spot. One good thing about fishing the river for this coming spring is the Plum Island Jetty which is currently being repaired. This will increase the distance and safety for anglers who choose to venture out there. Reports say that it should be completed by mid-April. 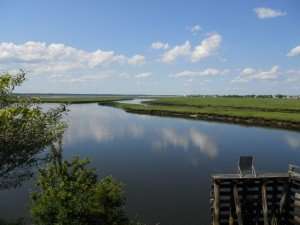 2- The Marsh
Once the fish have entered our estuaries by mid-May, I tend to turn my fishing inland to the marsh, more specifically the Parker & Ipswich River’s. The water in these areas tends to warm up sooner and gets the bait moving and fish feeding. Because of where I live, one area I tend to frequent is the area around the bridge when you cross over to Pl. There are a few different spots I frequent right in this general vicinity. During the early season, I like to start with using top water lures and small swimmers. This area is also considerably shallower than fishing the Merrimack, so it’s better to user lighter lures which swim higher in the water. You can also find marsh fishing opportunities at the end of Stackyard Rd. in Rowley. This area is part of the Parker River Wildlife Refuge. Dress accordingly as you’ll be likely walking in some mud and bug-spray is a must!

I have a preference for fishing the marsh at night. For one, it is typically cooler and less buggy. Secondly, I theorize that bigger fish move up the marshes at night, as the biggest fish I have caught have been under the cover of darkness. Make sure you slow your presentation down too (as you should always do at night).

If you’re thinking “What about Joppa Flats?” well for one I don’t have a kayak or boat, and second I just don’t have much experience out there. So you don’t want my advice on that… 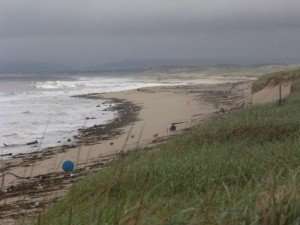 3- The Beachfront
By late June into early July, the water further up river and in the estuaries has become a bit too warm for the taste of resident line-siders. The fish begin to move out the river and split their time between cruising the beach and moving out deeper in search of cooler water. During the hottest times of July and August, I focus the majority of my time with night fishing. The tides will usually dictate the time of my departure, sometimes 8pm or sometimes 1am. I tend to focus on the top sides of tides, both incoming and outgoing. In my opinion, the incoming tide partially plays a role in bringing fish in by via tidal movements alone. On an incoming tide, the current seems to run from right to left. This indicates the majority of water is heading towards the mouth of the Merrimack. The opposite occurs towards the southern tip of the island where the Ipswich and Rowley River exude more influence. In my opinion, the key to fishing the beachfront is all about moving until you find where the fish are holding. I don’t have the patience for bait fishing (with the exception of live eels), so you won’t get much advice from me on that. 90% of my fishing is done with artificial lures these days, and if you are planning to as well, get yourself a plug bag and prepare to travel light as you’ll be doing a lot of walking (in sand).

Large beaches like Plum Island can often seem barren desert and devoid of life, thus making locating a fish seem like finding a needle in a haystack. However if you can identify sometimes even the most subtle of structure, it can greatly increase your odds for hooking up. Try to look for sandbars within casting range where whitewater may occur. Another thing to look for is “cuts” in the beach. These can be identified as what looks like “fingers” that extend out into the water. To either side of these “fingers” is often deeper water, where fish hold waiting for un-suspecting prey. Additionally the three additional jetties that line the beach can be excellent forms of structure that fish gravitate towards.

During the late summer and fall especially,  the beachfront can at anytime be host to an all out blitz of Stripers and Bluefish crashing schools of Sand eels or juvenile Herring. I was lucky enough to be in attendance for a few of this last June-July. They predominantly occur during the early morning and evening, but can certainly happen mid day. Typically they move fast, so keep an eye out for the tell tale signs of diving birds and fish crashing the surface. The “Fall Run” is usually the best time of year to be a fisherman on PI. Come September and October, fish are feeding intensely to fuel up for their migration south. Water temperatures begin to drop from their summer highs and into a range which makes the Stripers much more active. Bait is also moving, making the same trip as the predators that pursue them. This time can also be the toughest to fish for the un-initiated. The nights and mornings are cold and storms frequently whip up the surf into a dangerous froth. This is a time for waders, thermals, gloves and keeping dry. Those that are not properly prepared for one of these outings will likely be calling it quits early. This past year I caught fish up until Nov. 3. The biggest fish of the year I took on Oct 28. So yes, you could say I do favor the fall run….