This Week in Photos 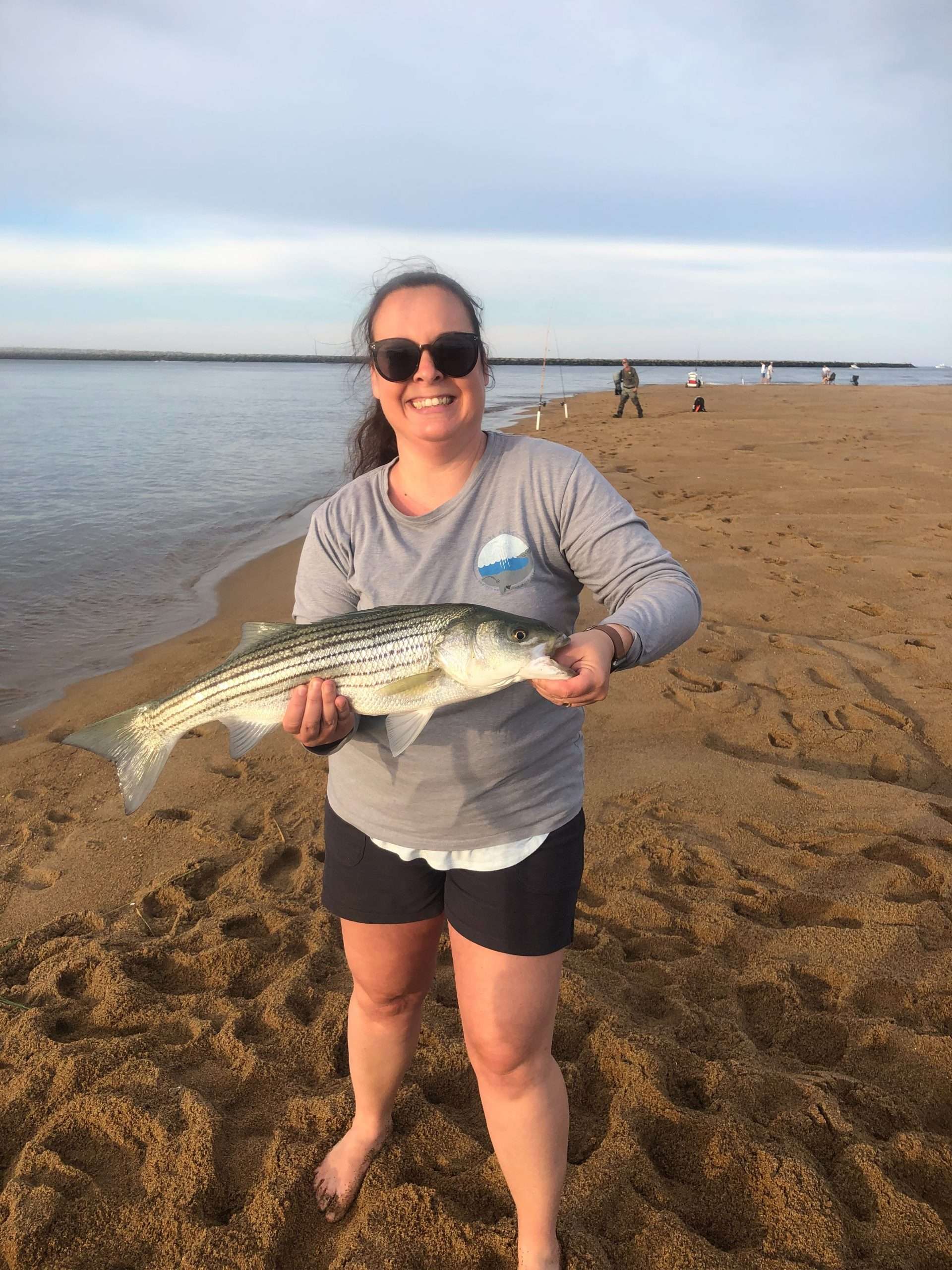 25 Jun This Week in Photos

Great week on the river and the beach. Plenty of mid-sized stripers, plenty of keeper-sided ones too.

The boys over at Cyfinn Outdoors have been putting some good fish on the boat with plenty of slot limit bass and lots over the limit. Cylas got his personal best this spring 46” on a live Mac. I would of loved to catch a fish like that at twelve years old. They even let the old man reel one in too.
Thanks to everyone at Surfland and tight lines! 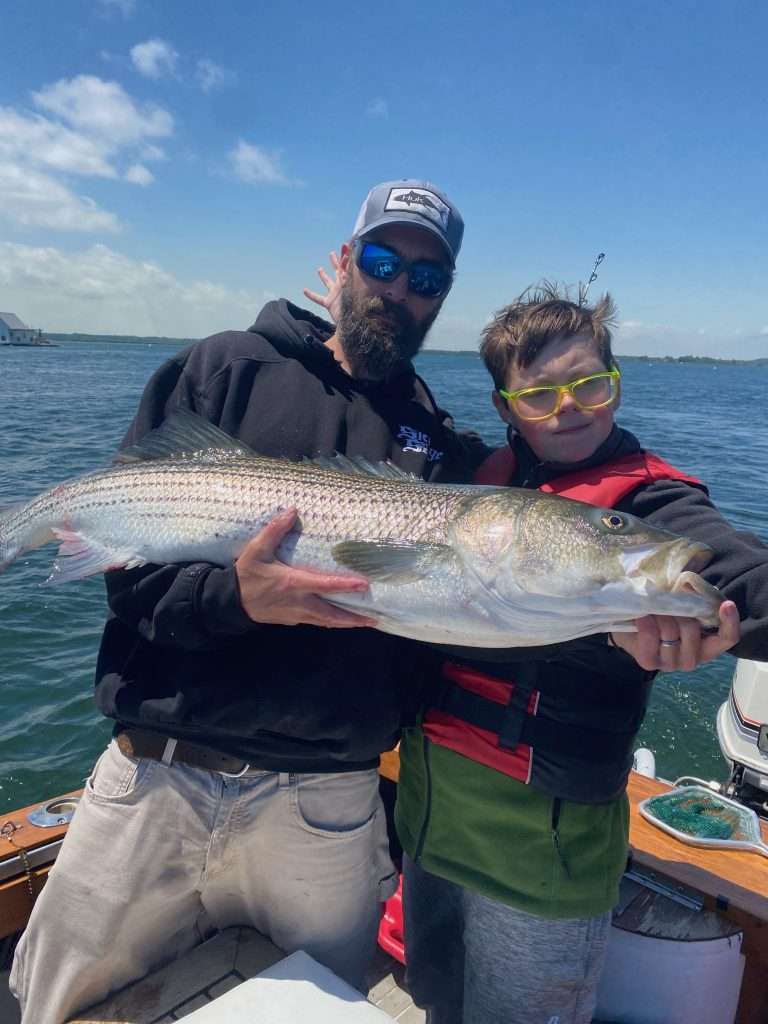 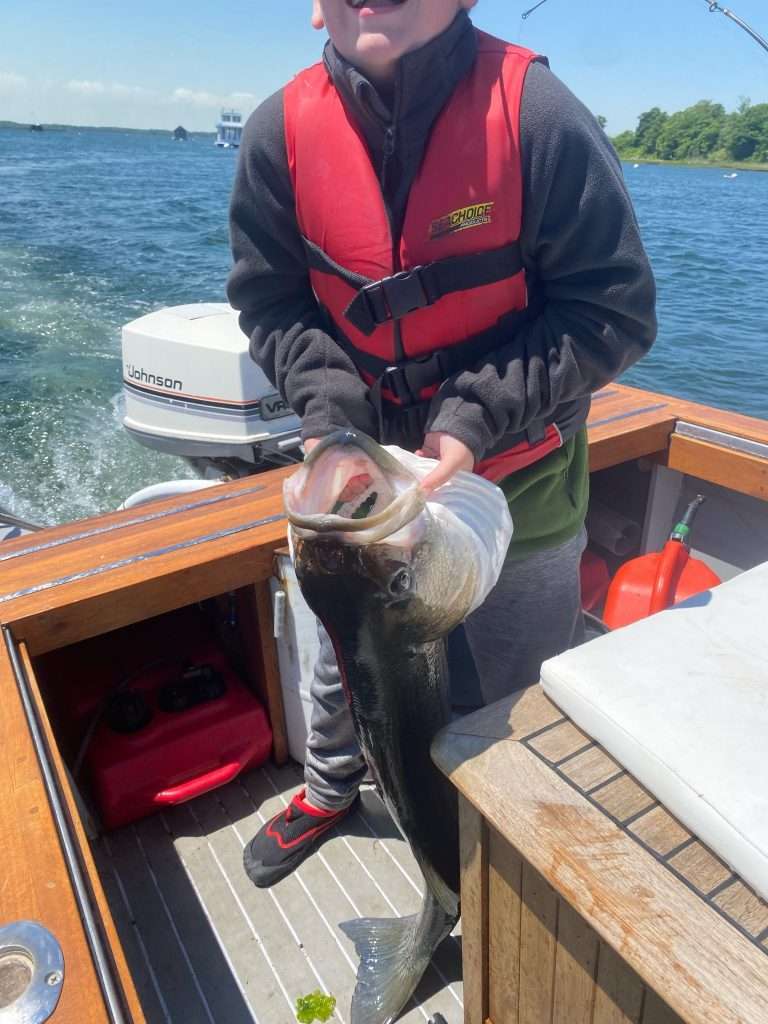 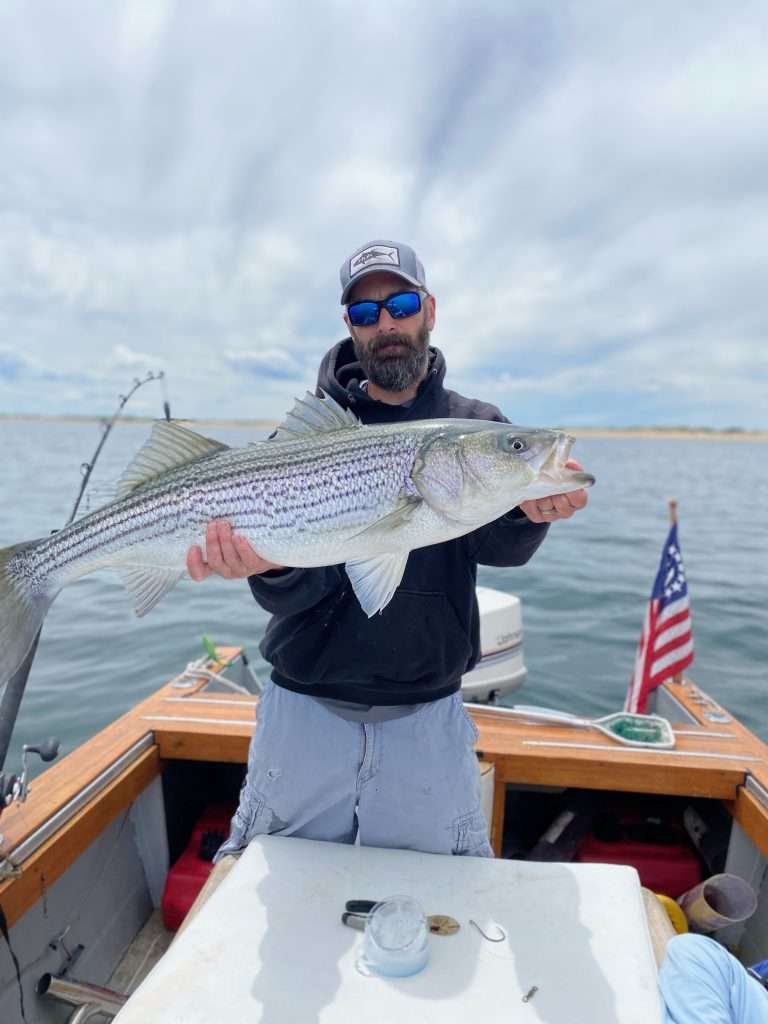 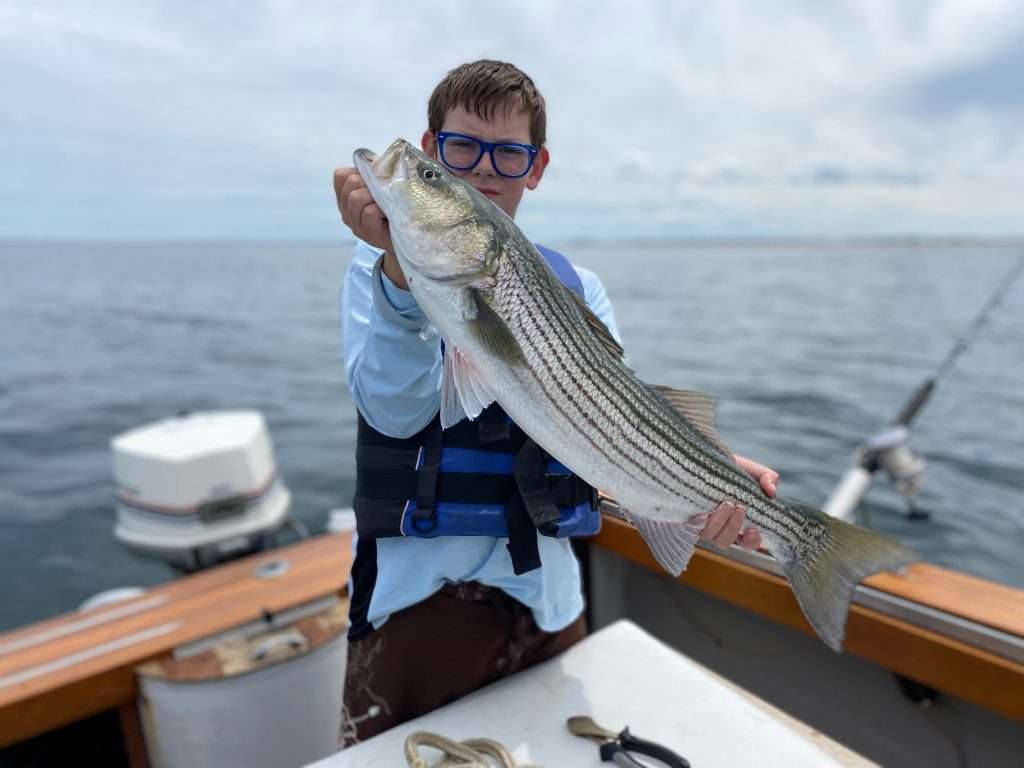 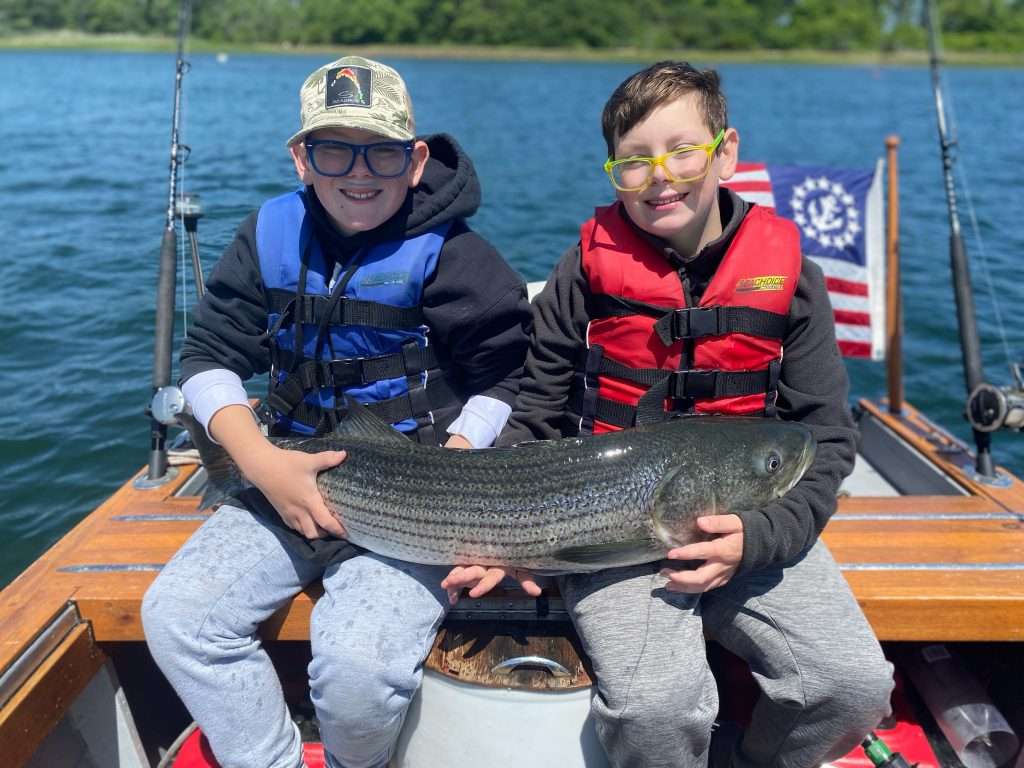 Peter Witwicki with his 31″ that he caught in Salem Harbor using an Al Gag’s Whip-it-Fish! 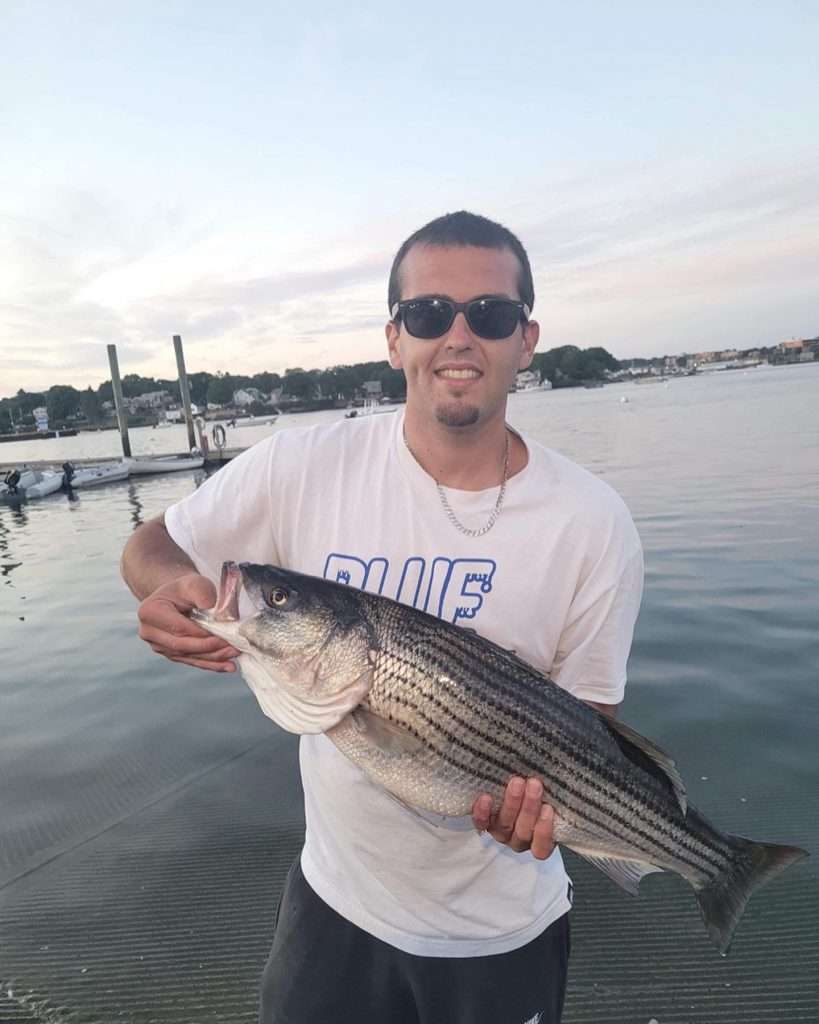 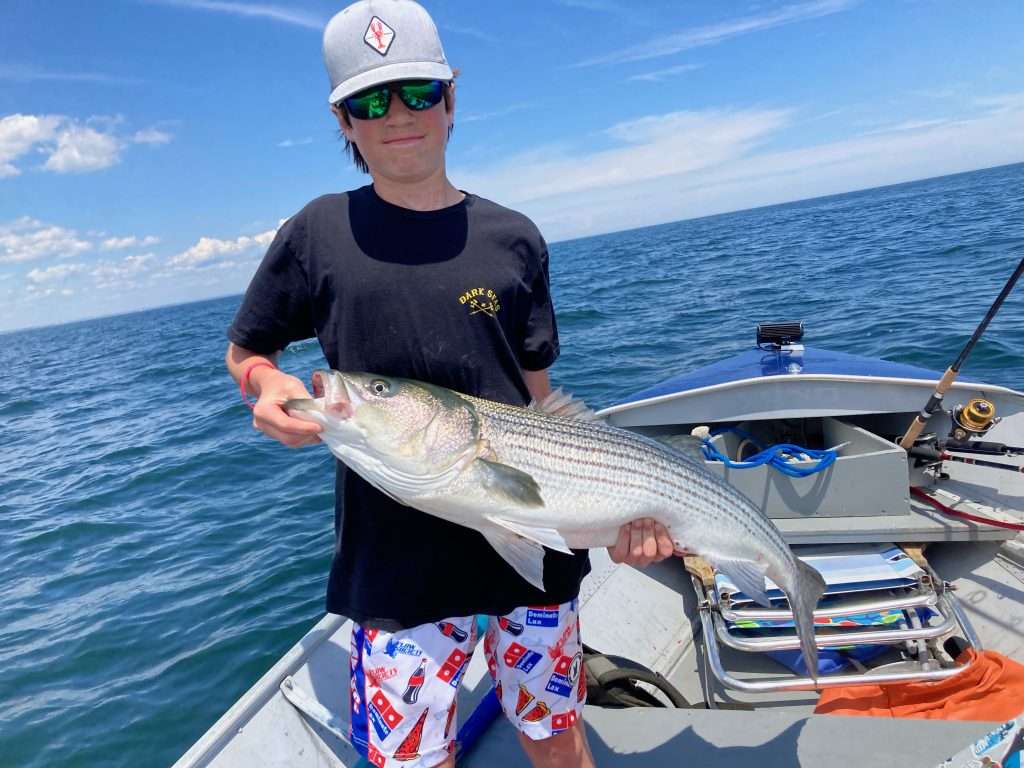 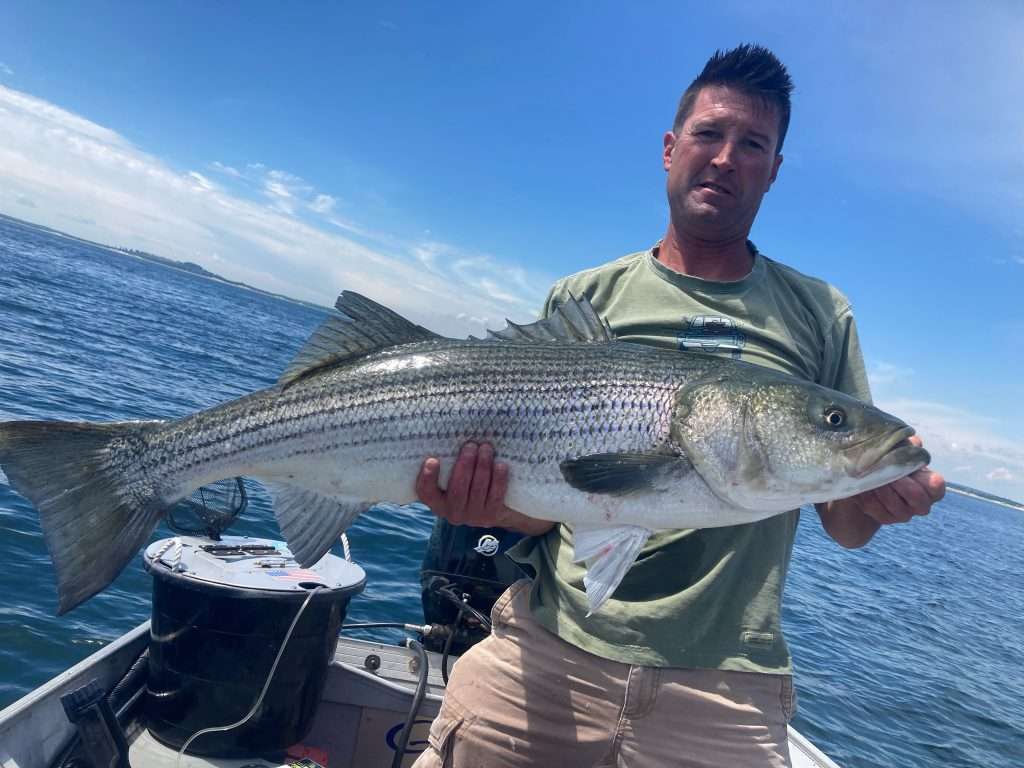 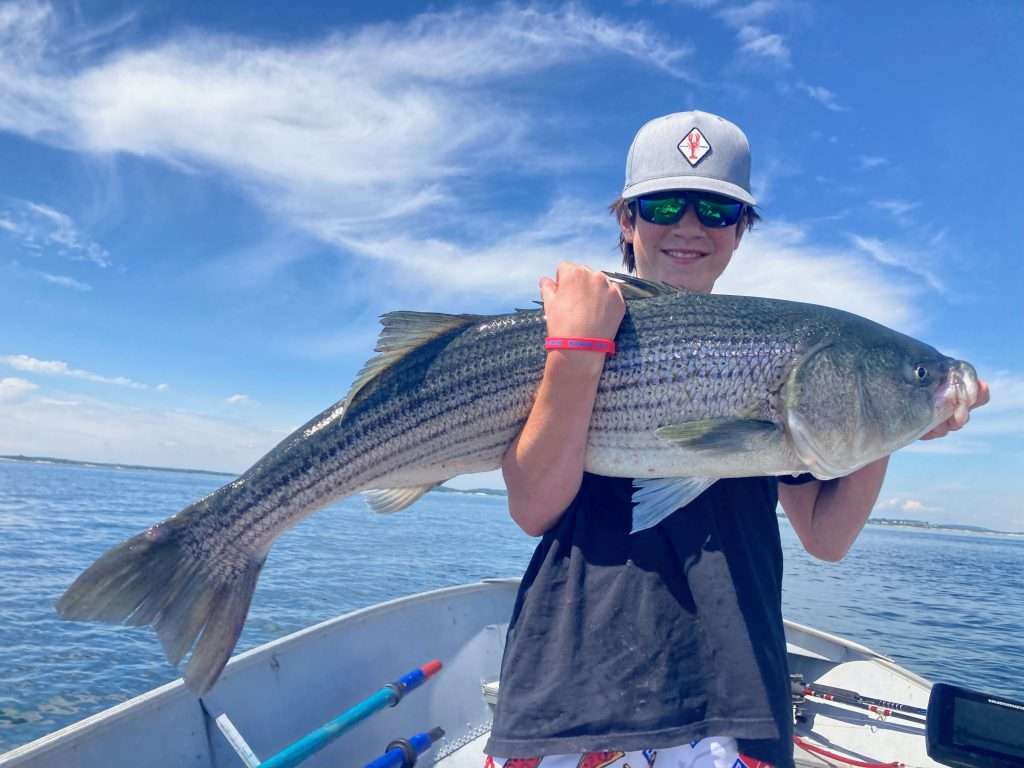 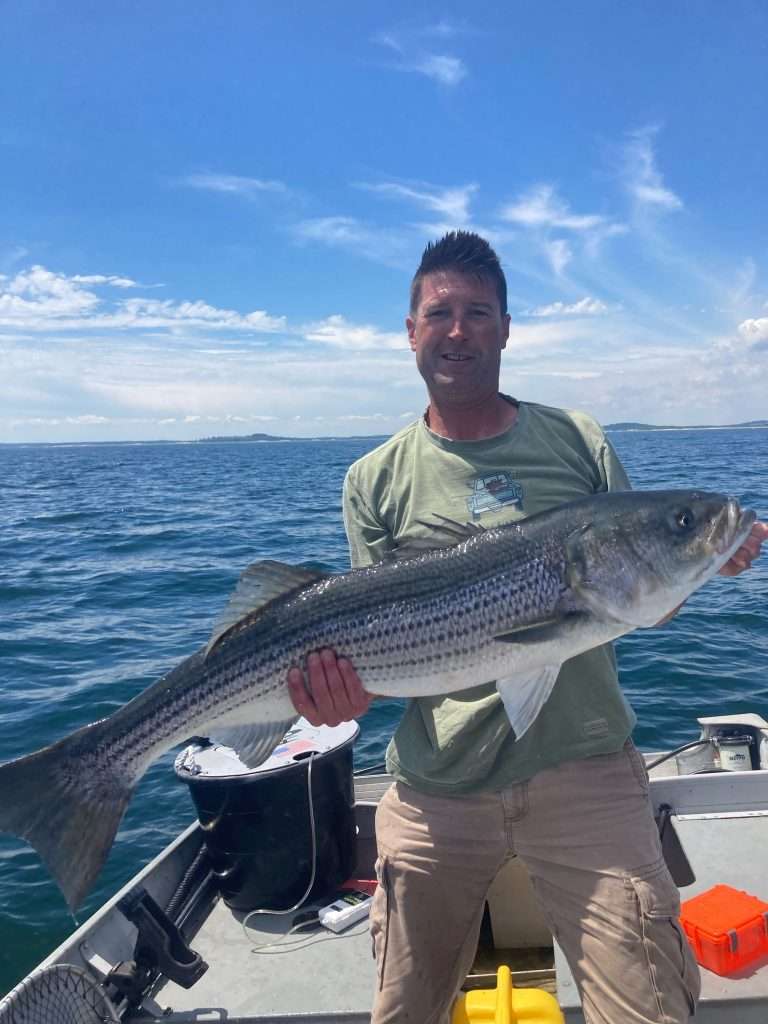 Best  Fathers Day tradition is fishing with Capt Chris on Manolin.  He’s a real pro and teaches the kids everything about what’s around them.  He always gets us on the fish and it’s been 7 years and many more to come my kids always have a blast and always bring their Surfland Hoodies.
Todd Arivella 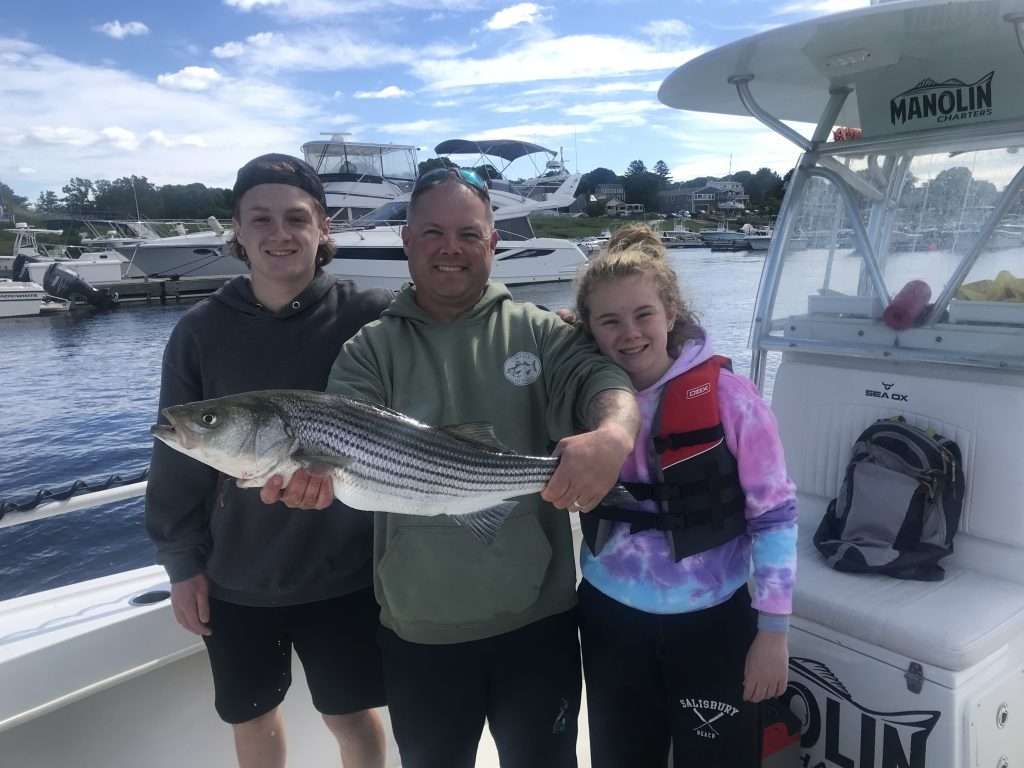 ~~~~~~~~~~~~~~~~~~~~~~~~~~~~~~~~~~~~~~~~~~~~~~~~~~~~~~~~~~~~~~~~~~~~~~~~~~~~~~~~~~~~~~~~~~~~~~~~~~~~~~~~~~~~~~~~~~~~~~~~~~
ANTONI SAKOWICZ
Hi Liz,
I came in early afternoon yesterday and asked to be on the website. (tattooed guy with the 31”er) You took a couple pictures and told me to send you a little story and some info
here ya go…
I took a few days off from work and headed to Plum Island for some fishing. Being a holiday on Monday it was a bit crowded on the river. Some people were catching fish and some were not, but everyone seemed to be enjoying themselves. Most were using chunked up Mackerel, some using worms or clams, while a few others were casting lures. I decided to go strictly with clams and landed 3 fish that morning. In the evening I fished the ocean front and landed 5 more. Tuesday saw a lot less people with the same scenario and I was lucky enough to land 2 in the morning, and another 5 again in the evening. Wednesday morning I found myself packed up at the motel when I called my wife to let her know that I would be heading home shortly. Thankfully she suggested I give it one more try seeing I was already here. I graciously took her advice and I’m glad I did as the Striper Gods were with me. I spent two and a half days on the Island, the weather was a bit on the chilly side but nice and sunny with a SSE breeze. All-in-all I landed a total of 16 fish, most being in the 23”-26” range with a few smaller ones mixed in, 15 of those safely released back into the water to swim another day, the exception of course being the 31”-11.2 lbs beauty which came home with me.
A big “Shout-Out” to all the friendly folks at   “SURFLAND BAIT & TACKLE” and a special thanks to Martha for setting up my 2 reels with new line, and too you Liz for taking the time out of your busy day to take my picture and listen to my fish-tales…!
Thanks so much, 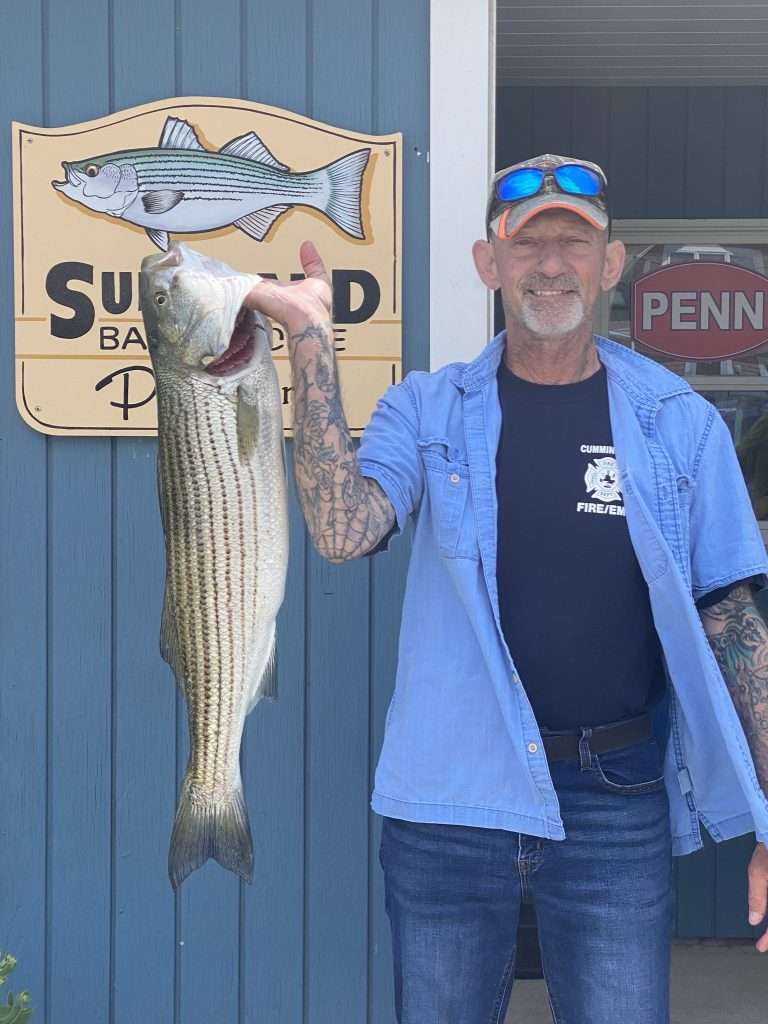 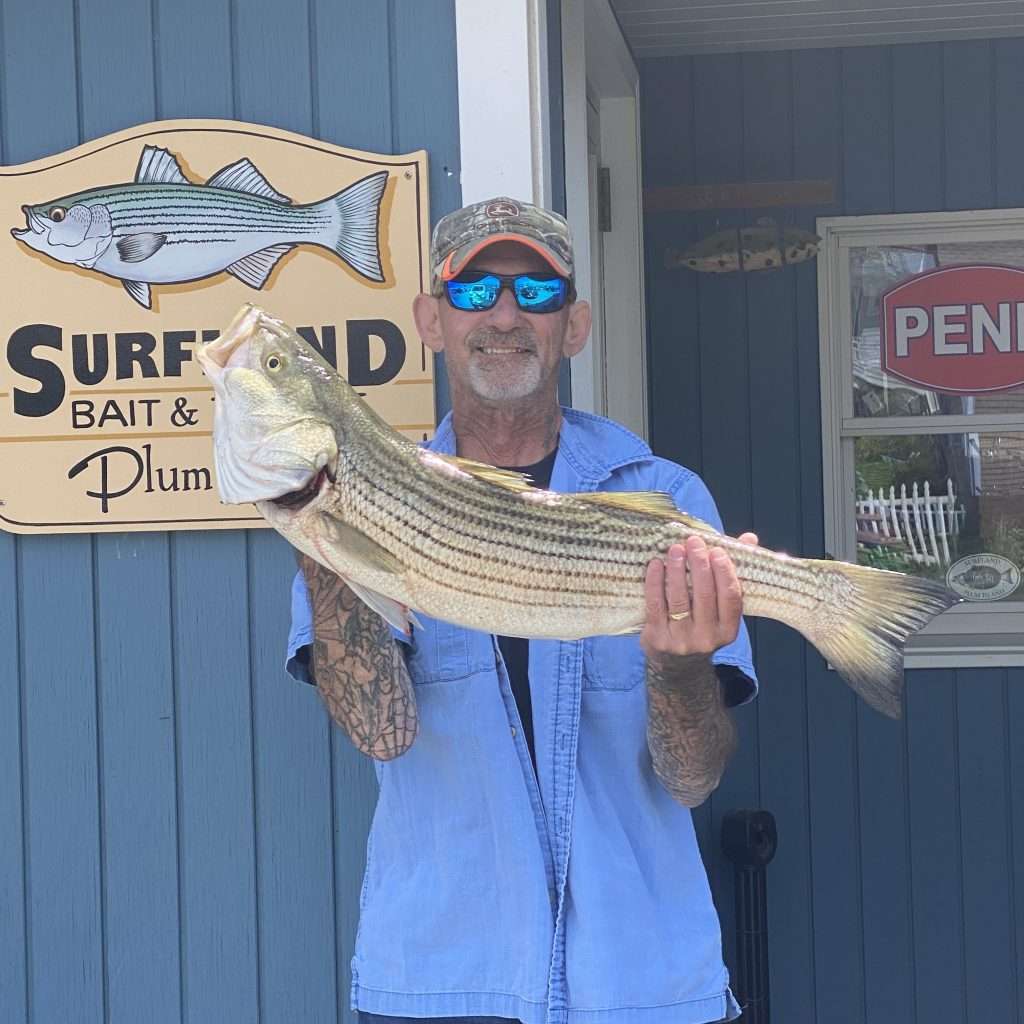 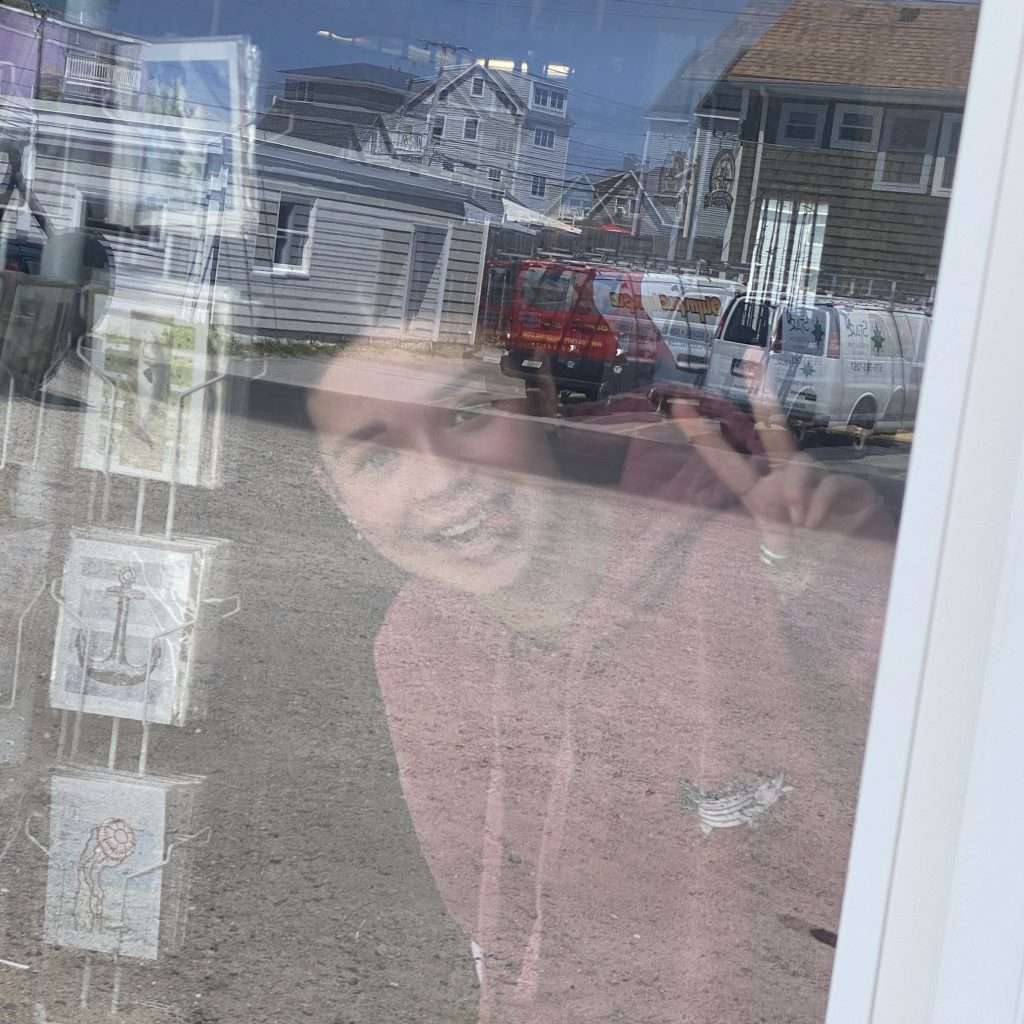 We had a great family fishing day last week! Nothing sparks a little guy’s interest like watching Mom and Dad catch fish. 40 inch bass at low tide on surfland surf clams. Great start to the season! 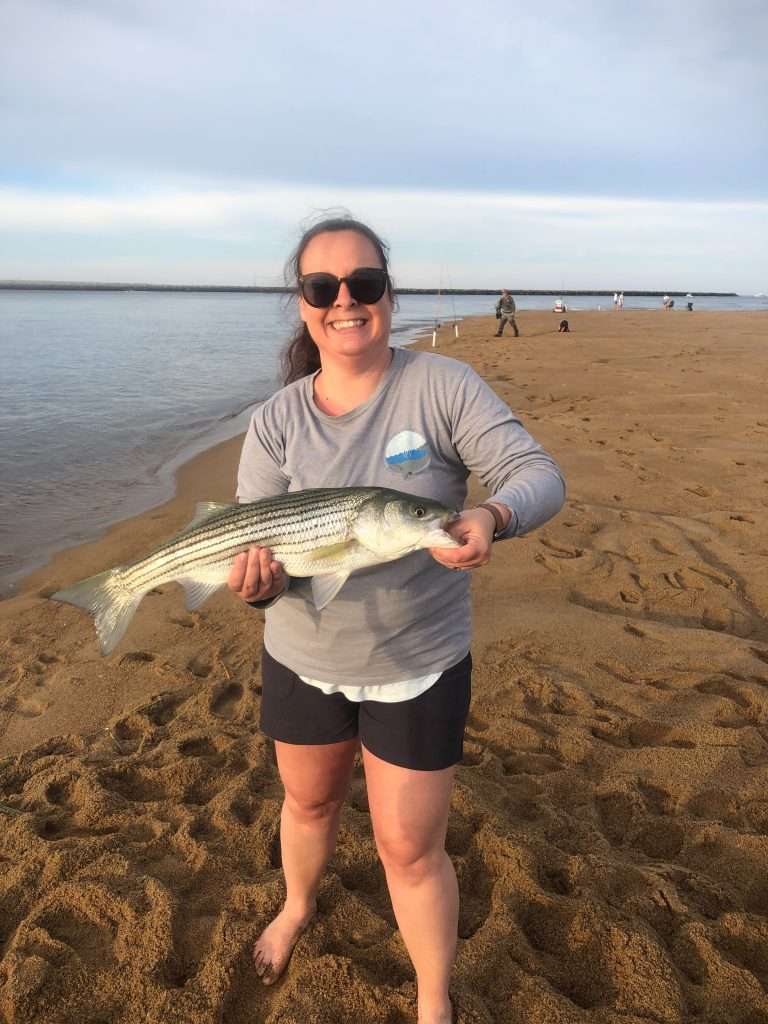