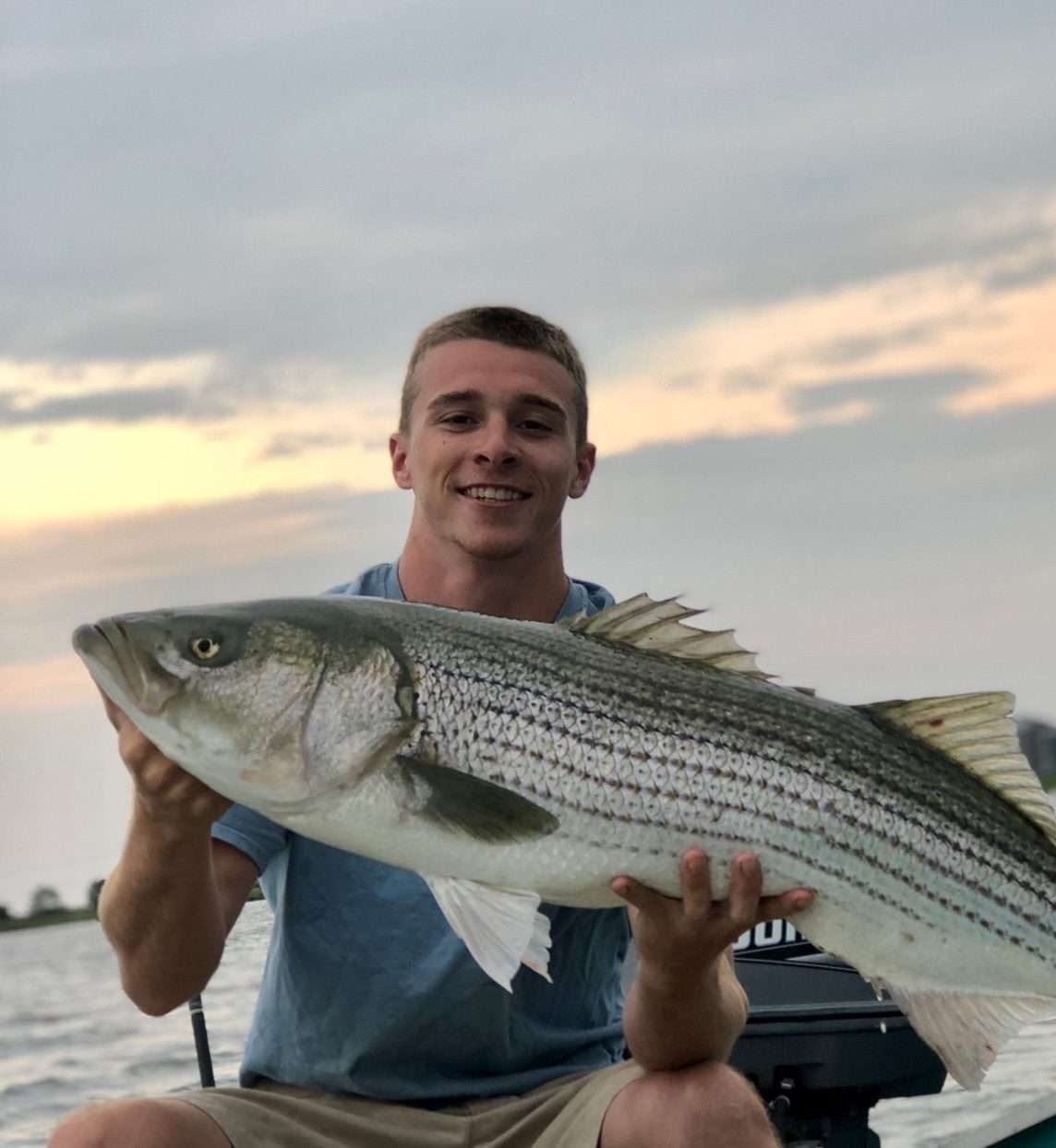 Wow, some wind the other Monday night. Mugsy from the shop reported winds of 50 mph at his house on the northern end. And some small waterspouts over the ocean that he could see from his rooftop deck.  But other than the storm that blew through it has been a perfect week of weather. And just before the storm, local boy Cody was out in his boat and was into a school of big bass. Here are some pictures of a fish and the calm before the storm. This bass weighed in at 32 pounds and was 45 1/2″. (Nice Sky!) 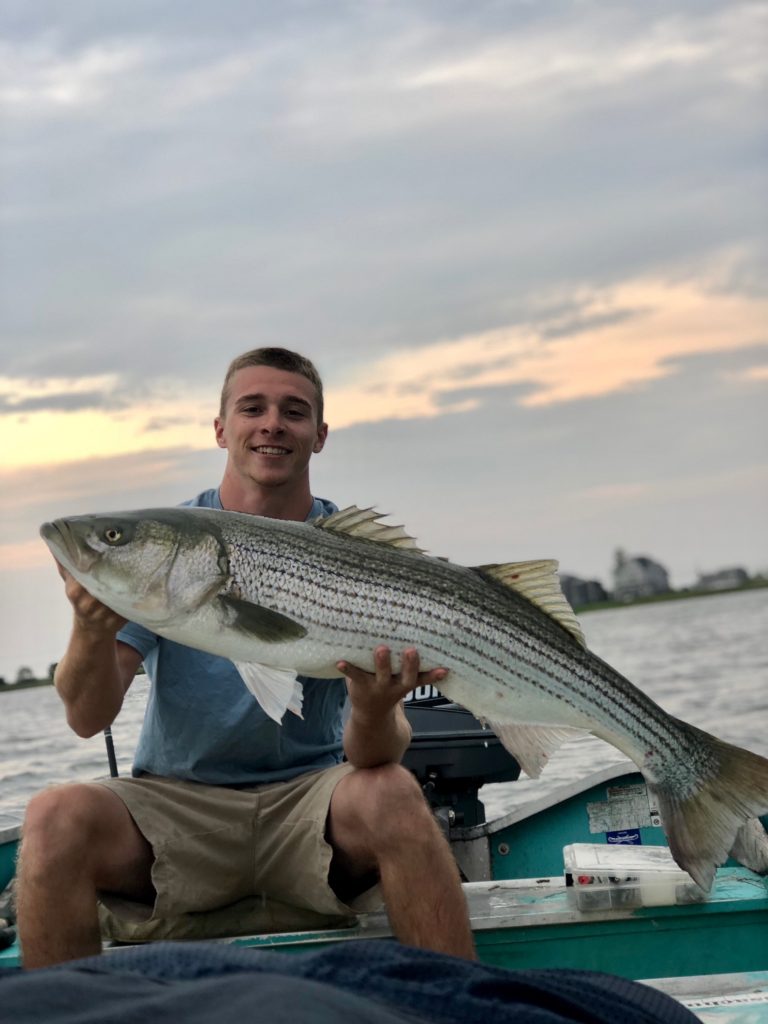 We had two fishermen come in a couple days ago and tell us that they got into a huge school of 20+ pounders during the bottom of the outgoing tide. Maybe same school Cody says that is out there.  They said at first a bunch of small fish came through and then it was quiet and then all of a sudden a massive school of these bigger fish starting biting. They had a good day!

There are a lot of fish in the area.  Steve Leblanc has has some good luck this year. He had Phil and his son Phil out this week. Little Phil Blankenship from Groveland caught this 11-5 pounder on mackerel out on the front beach not far from the shop on Monday. And then the next night just before closing came in with his catch. Phil’s dad Phil went out on the marshes and caught this 12-5 pounder on chunk mackerel on the top of the outgoing tide.

A good Surfland report wouldn’t be as good without a good picture from John Healy……….. 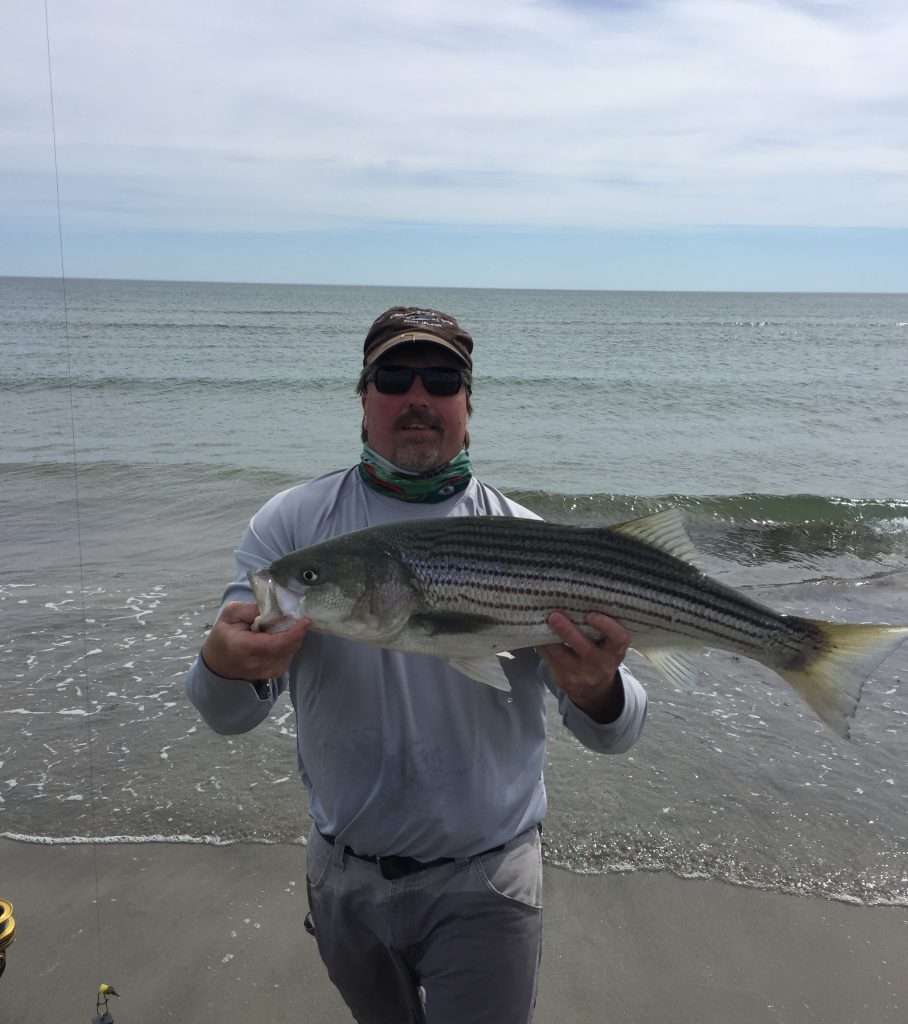 around 9:30 which is still roaming the shoreline to get even fatter,  see ya”

*Also received a photo from a fisherman that went out of one of the local charters, Manolin. Congrats Brogan and I must say that is one cool shirt you are wearing!!! Way to go!

“Hi, my name is Todd and to the left is my 11 year old son Brogan with his FIRST EVER striper.  We are from Haverhill and had a fantastic Father’s Day weekend fishing trip with Capt Chris on Manolin Charters.  He got his 12.5 lb on chunk mackerel upriver.  He was adamant about getting his surfland shirt in the picture.  I had a 9.5 and an 11lb fish on a small Mack and a pollack.”

~~~~ So all in all its been a good week of fishing so far. Seems that there are bigger fish around, just have to get through the small schoolies. Happy Fishing!