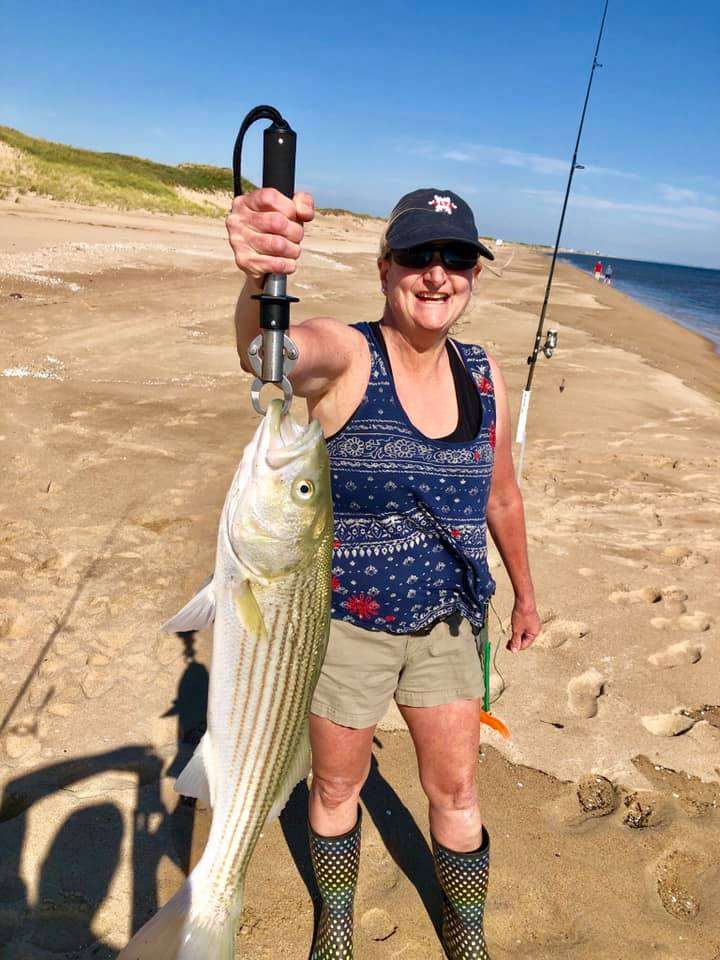 “So Liz told me “Dad always said worms were King”. Not arguing, we had a blast. Nothing huge but plenty of fish through the top of the tide on Saturday a little South of parking lot 3… ”  ~Andy & Mel Robertson, Deerfield NH

Worms are king. Yup, Ray always used to say it. Have been hearing it said in the shop for years. There have been a lot of fish caught on worms over the years off Plum Island Beach. These guys have given it their all for you fishermen and they deserve their due.

The fall is a big time for worm fishing along the oceanfront, especially in the PRWR. It is not uncommon for some guys to go through dozens of worms a night. Granted a lot of little fish are caught on worms, but the big guys like them just a much. But if you are out to enjoy the day on the beach and are happy catching any size fish then the mighty worm is the guy that will get the job done for you! (or die trying!)

The rest of the week has seen a slow down of customers, but not fish. They guys that are coming down have been steadily catching fish along the oceanfront. Just had a few customers in and they also said they have been doing well along the oceanfront. Like Bil Silliker from Newburyport. Bil has been waiting 5 years to get his “keeper” and it finally happened this past Sunday. Bil was in 5 years ago and bought a rod off of Billy (remember that guy? MISS HIM!!), and has been using it since then catching lots of schoolies, but never a keeper. So on Sunday am, two hours into the incoming tide, at 8:27am, using chunk mackerel, Bil caught this 31-1/2″, 10-1/2pound striper along the oceanfront not far from the shop. Never give up! Right Bil!

Offshore there is still a plethora of activity. The sturgeon are jumping like mad in the river mouths and along the oceanfront. The pogies are back around (reports are off of Ipswich area). The seals are back in numbers. They can be seen on the Salisbury side sitting on the cropping of rocks called Black Rocks as well as just bobbing around in the mouth as well as the oceanfront. The Mola Mola (Ocean Sunfish) are close to shore and flopping their large dorsal fin around getting people excited and thinking they are seeing sharks. Oh, but there are some sharks around ! If and when you can get out of the mouth of the Mighty Merrimac and head north you can usually find plenty of mackerel around breaking rock. But this time of year along with mackerel come the mackerel sharks. One such shark is called the Porbeagle and there have been plenty of these little sharks around.   Larry Bonney sent these pictures into us over the weekend.  What have you seen out there?