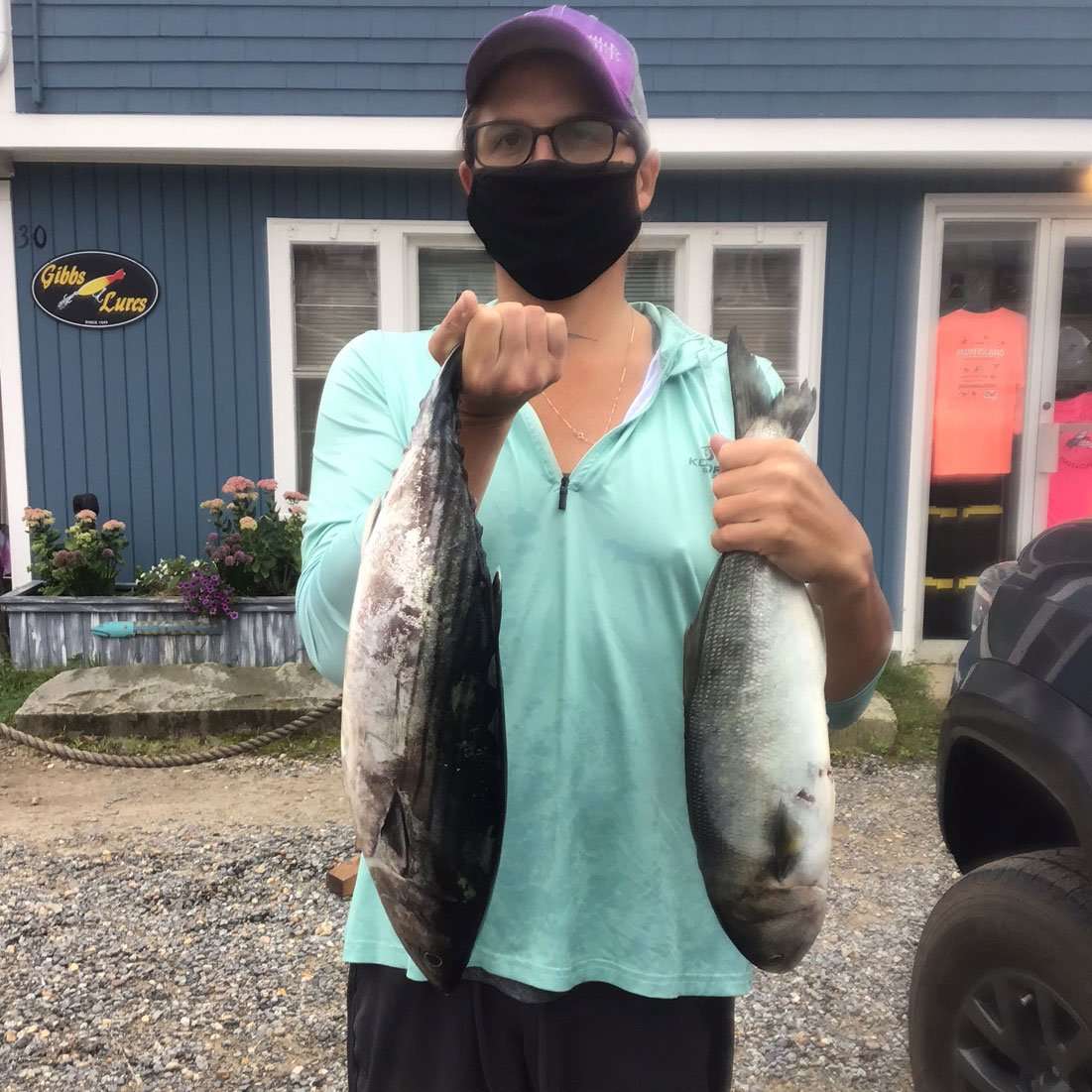 Stickman here. Yes, we at the shop have been insanely busy trying, successfully I hope, to keep you all in the thick of fishing this late summer. As the guy responsible for keeping up the reports, well, I clearly need a trip out to the woodshed. Anyway, here are some words of joy from the grapevine.

Reports of bluefish being caught using deep divers off the southern half of Plum Island trolling in the 30-50’ range have varied. Some days they’re there. Some days they’re not. George Bossy said they showed up again yesterday, “Deeeep.”

Lots of small stripers have been found in that area the past few days.

The surf fisherman have picked up small stripers along the beach, but have to fight with the seaweed that has been along the shore since it got churned up by the waves and east winds. A few small bluefish have also been caught off the beach down the southern end of the island.

Tube n’ worm action on the flats has improved, mostly schoolies. Had heard of a few fluke around also. Mostly undersize. Some in the Merrimack and down in the Sound.

Chris Bergen, who finally shocked me into writing today, reported this morning: “A week ago we had the blues to 8 lbs mixed in w Bass up to 26-27” in PI Sound. This week we’ve had some surface feeds with juvenile herring, peanuts, silversides amd some close to “rain bait”. Emerson’s has been quiet for me other than several leaping sturgeon off Cranes. Hoping we get a good fall run. Undoubtedly it’s already underway.”

Down to the south, Boston Dave was in to get sea worms this morning. He is reporting that Boston harbor was loaded with stripers Friday and Saturday in the 30-35”. Lots of different pods of pogies, everyone had their own pod! And everyone was hitting fish. Peanut bunker also shimmering on the surface. Today it seams a bit windy so he has gotten some worms to maybe stay inside and do some tube-n-worm.

Personally, my regular boat ride with Jimmy C and Dave R. produced a view of exactly 1 Bluefish busting out of the ocean off Plum Island Center. The rest of our 2 hour trip was spent quietly trolling for Bluefish with deep diving swimmer plugs. Nothing but a sunburn to show for it. Those two guys resorted to hiring a guide on Cape Cod this morning. They successfully landed a dozen or so Albies outside of Hyannis. But really, none of us care about the Cape right now. 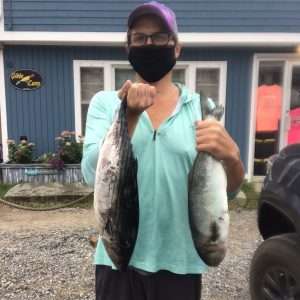 Alexandria C from Litchfield, NH was kayak fishing off Sandy Point. Got several bluefish, biggest was 29”. Several bass with with a keeper at 33”. And one bonito that was 25”. Mostly trolling swimming lures and casting some lures also. This is the second good size bonito that we have seen this summer. 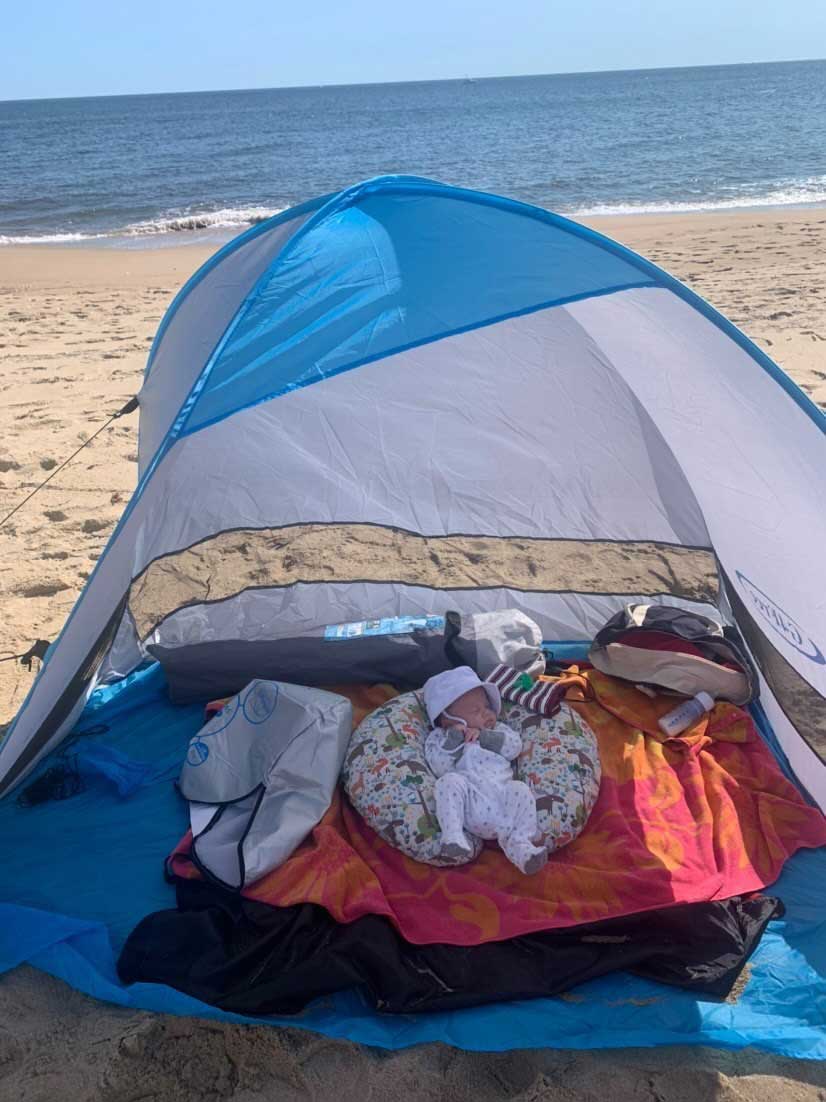 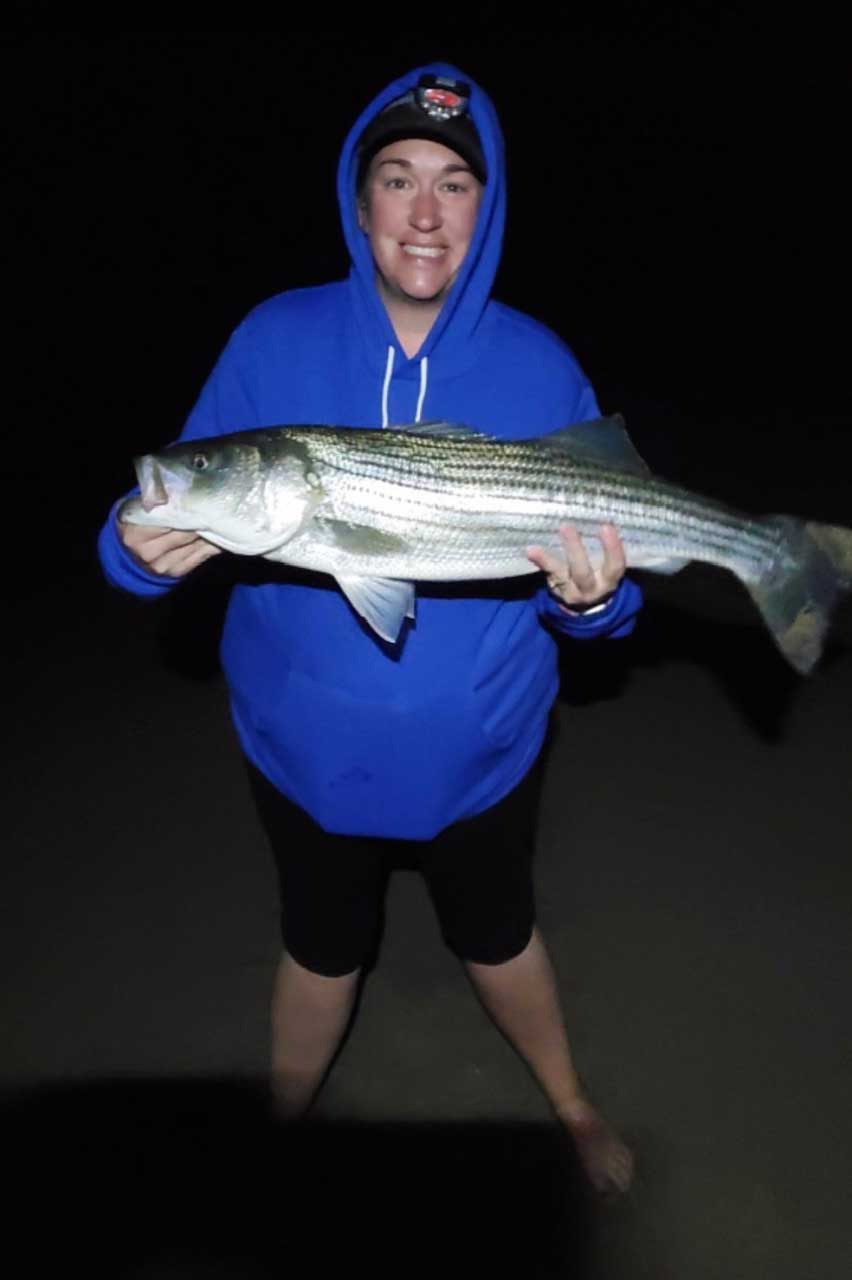 Welcome to Plum Island: Finley P. This young, (really young) man has officially joined the Plum Island Beach Buggy Crew. For those lucky ones that got picked in the lottery, the drive on season opened September 1st and some of the gang showed up for the first weekend.

Danielle D. (Finley’s mom) caught herself a nice 33” and also sent us a little report:”It was slow during the day Saturday, just a few small fish, but it picked up as the sun went down on Saturday. We got a ton of small fish during the incoming. But only the one big one, 33 inches. Sunday was dead but we left by 6 PM.

Pictured here is Finley enjoying his first (not his last) trip to Plum Island…..” 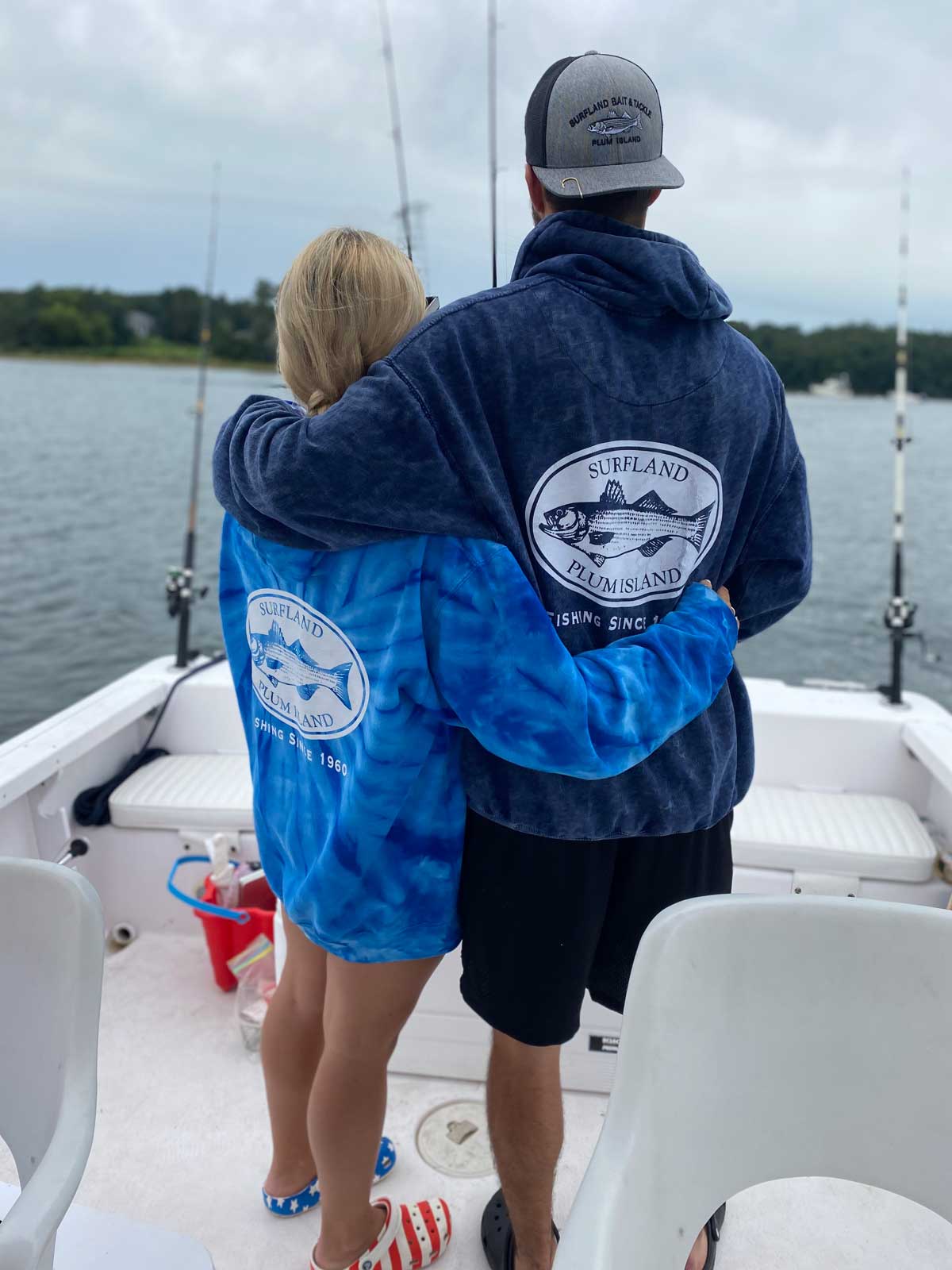 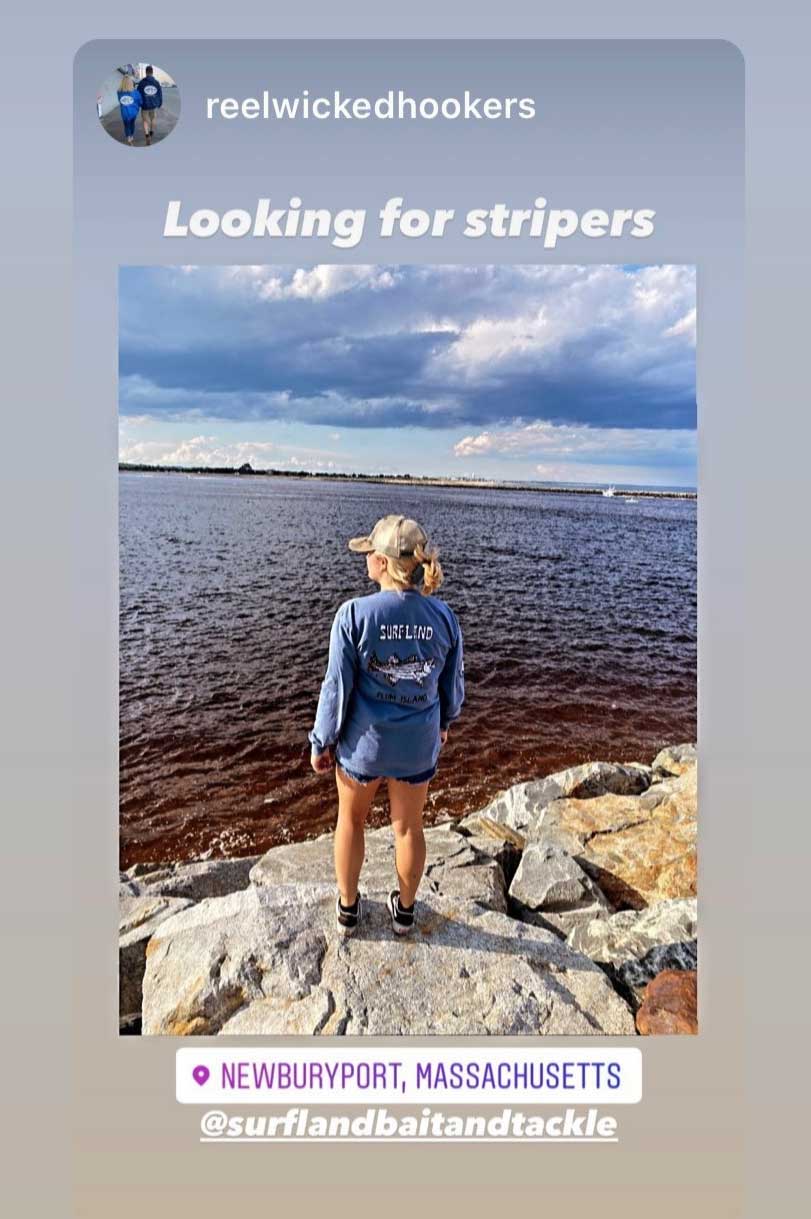 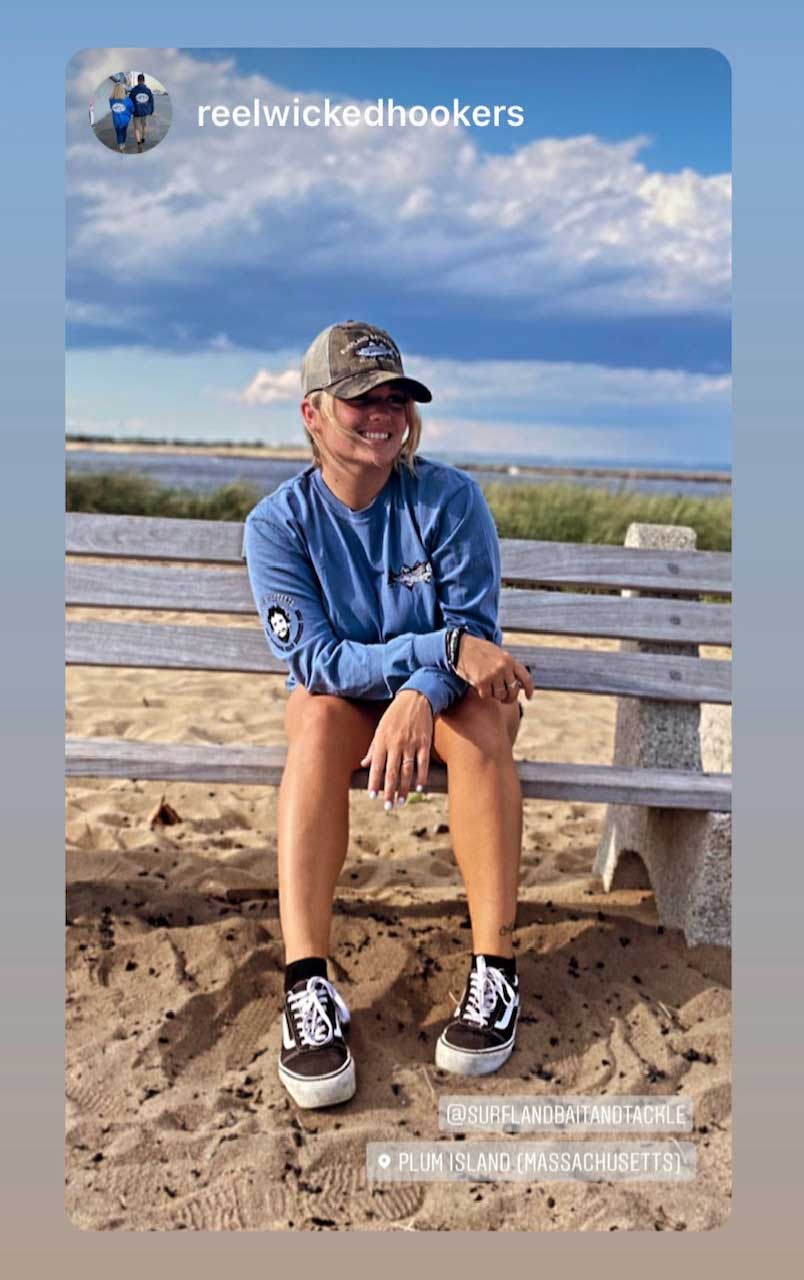 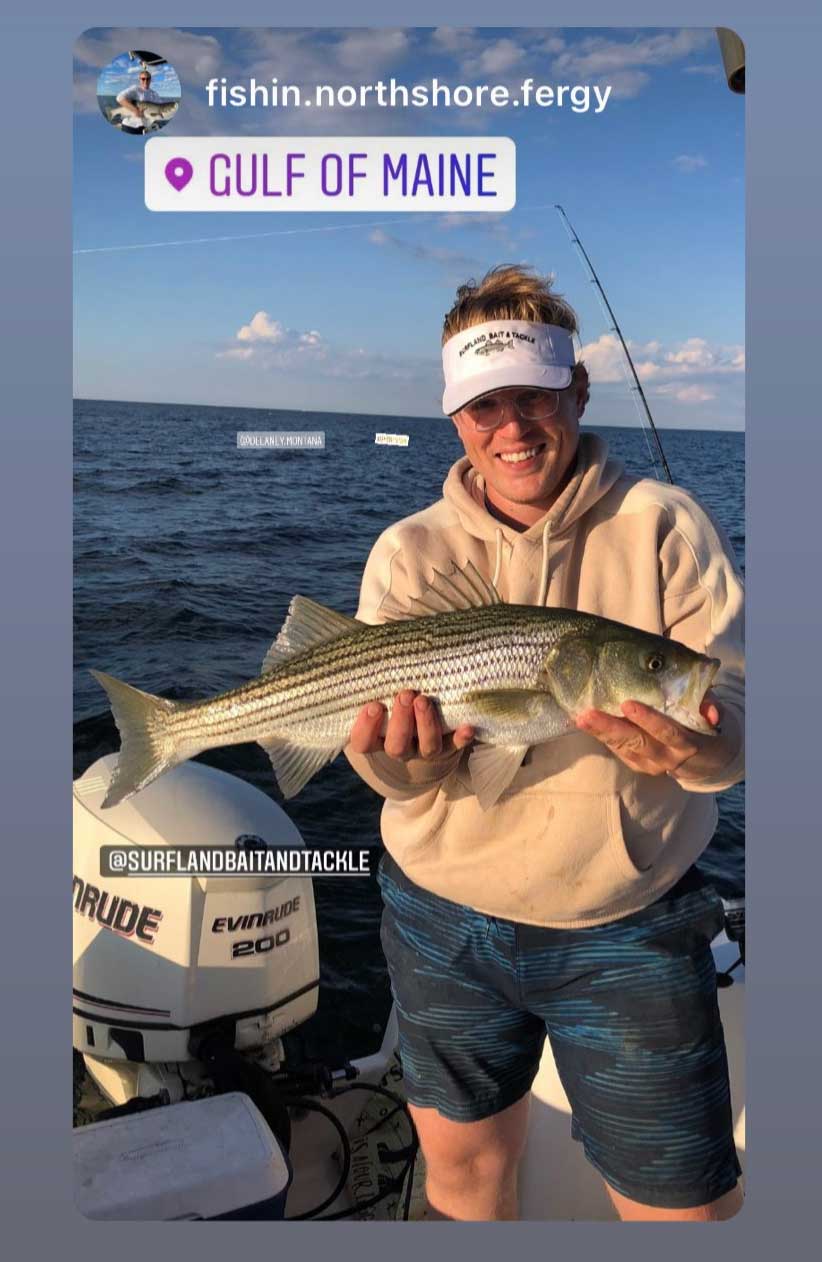 We are so very humbled that people ❤️ their Surfland swag.  we love seeing people in their swag!!! And try to get as many people into a post as we can..but here is one for today’s.

Eryka and Pat were out this past holiday weekend. Eryka sent some pictures sporting our swag and a little report.

“Last week was better for us but No it’s been slow this weekend I think because of all the boat traffic but hopefully later this week we’ll get on some fish!