With the big weather and lack of fish on the beach, what’s a fisherman to do? Well Hayden, a Surfland employee, decided to go north and try for some trout. Here’s his report. Of course, Hayden never tells us where he goes. Cagey.

Started out just trying for a couple of browns that i knew were
stocked not too long ago…….

not 5 minutes justin and i had a double with jumping browns. took out
pictures then missed a few more then justin got another brown released
it and then i had a take on my phobe in gold smallest one they make,
and it was no brown trout. i saw this monster fish roll and i opend
the bail to absorb that intial run that i knew would happen. sure
enough this fish took off and i managed to turn her head with the 4lb
line. after a quick 5 min fight she was in my buddy justins death grip
after some words were exchanged to say the least. after i stopped
yelling and hollering justin handed me this beast. We went alittle
crazy with pics and slid her back to the depths. She measured 30.5
inches long and happened to be my first ever salmon!

Next castes we threw we instantly tight to our next fish. We both
got at least 4-6 browns between us until justin pulled off a huge
brookie. Snapped some pics and he did it again after a few more browns
were caught!!! i was getting the stockies left and right then i got a
nice 13inch brown with some amazing colors. After that the wind picked
up and we saw a lull until the wind just quit and fish were rising
everywhere!!! After a few browns i managed to get tight to something
that didn’t feel like a brown, sure enough i saw that fire belly dart
off and pull hard. i grabbed the fish and he flopped at the same time
while unhooking himself and landing square on the dock bouncing away.
i grabbed him for a quick pic and back to the lake he went all
14.5inches of him. the days total was for justin was around 10 browns
and two huge brookies, i got that monster salmon, brookie and around 8
or so browns. What a day 🙂 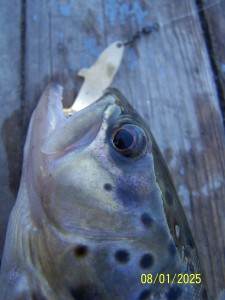 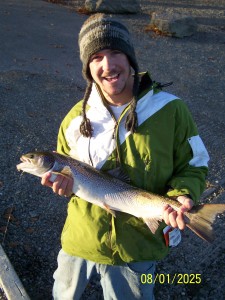 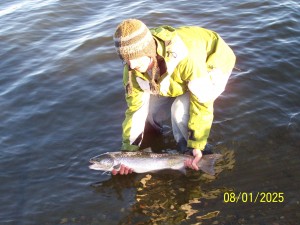 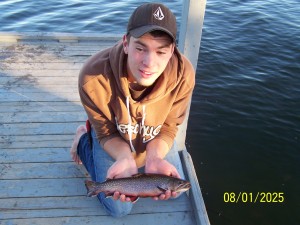 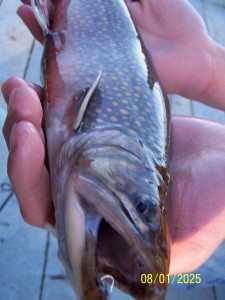 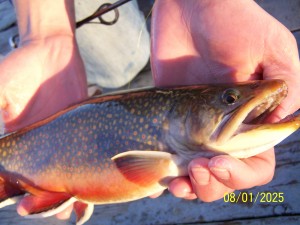